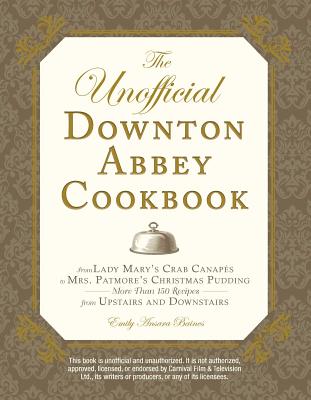 Bring Upstairs and Downstairs Fare to Your Table

Nibble on Sybil's Ginger Nut Biscuits during tea. Treat yourself to Ethel's Beloved Crepes Suzette. Feast on Mr. Bates' Chicken and Mushroom Pie with a room full of guests. With this collection of delicacies inspired by Emmy Award-winning series Downton Abbey, you'll feel as sophisticated and poised as the men and women of Downton when you prepare these upstairs and downstairs favorites. Each dish finds its roots within the kitchen of the grand estate, including:

You will love indulging in the splendors of another era with the snacks, entrees, and desserts from this masterpiece of a cookbook.

As featured in Woman's World magazine and The Daily Mail UK!

"Whip up a Christmas plum pudding and settle in for season 3." --People Magazine

"American fans have to wait until January to return to the lives of the fascinating upstairs and downstairs residents. To hold yourself over, try some of these delicious dishes before returning to the big house." --The Today Show Bites Blog

"Add a bit of sophistication and style to your Downton Abbey watching parties in the months to come. The great thing about the book is that it is not only laid out by meal course from Hor D'Oeuvres to the Finishing Touches of Sweets and Desserts, there are also some bits and bobs that will help you prepare Afternoon Tea, course pairings, tips for table seatings and etiquette guidelines." --Tellyspotting.org

"Downton Abbey fans in America may be feeling hard up for some period drama, and the knowledge that we won't get to watch season 3 until January 2013 has us scheming up ways to get our fix. There's one other way to consume some Downton Abbey drama: by cooking it. That's right, The Unofficial Downton Abbey Cookbook is on the way, by Emily Ansara Baines, who also gifted us with The Unofficial Hunger Games Cookbook. Helpfully, she includes conversion tables for metric measurements, baking pan sizes and temperatures - these alone are worth the $21.95 cover price. Downton Abbey fans, get cooking!" --Wall Street Journal

"Not only is the cookbook a fascinating look at the British television series itself, it's a great historical look at the types of foods that were eaten by British royalty in the early 1900s. If you're a fan of Downton Abbey British television series or British cooking, you definitely need to buy The Unofficial Downton Abbey Cookbook." --Blog Critics

"Fans of Downton Abbey, you have to reasons to rejoice! Your long wait for the start of Downton Abbey, Season 3 in the United States is mitigated by the publication of Emily Ansara Baines' The Unofficial Downton Abbey Cookbook. Peruse through its pages and you'll find period dishes from the Victorian and Edwardian eras. For the Downtown Abbey fan whose growing anticipation for Season 3 needs an outlet, this cookbook would make for the perfect gift." --Epicurious.com

"It's filled with classic English recipes inspired by the show, tidbits about the denizens of Downton and tons of asides guaranteed to make a true fan smile and nod knowingly. Possibly the best part about the cookbook? It showcases the upstairs and the downstairs, just like the show. Even if you're not a Downton Abbey fan, this is a great general English cookbook to have on the shelf. If you are a Downton fan, it's probably a must buy - or an easy holiday gift for a fellow fan." --Chicagoist

"Filled with classic English recipes inspired by the series, tidbits about the denizens of Downton Abbey, and plenty of asides guaranteed to make a true fan smile and nod knowingly." --Daily Herald Tribune

"Baines seems to have done a fair amount of research on the dining habits of Edwardian England. For fans of the program this book provides a good collection of recipes for re-creating a meal that those upstairs or downstairs at real English estates might have had." --The Advocate

"If you are enjoying further exploration of the trends of the Downton Abbey-inspired era, you'll love the etiquette lessons and 'time goes by' insets throughout the hardcover book. With this collection of delicacies...you'll feel as sophisticated and poised as the men and women of Downton when you prepare these upstairs and downstairs favorites." - Monsters & Critics

Emily Ansara Baines has worked as a professional baker and caterer throughout the East Coast, most recently in New York City. When Emily isn’t busy writing, baking, or trying to learn French, she’s watching her favorite series, Downton Abbey, in hopes of one day being as elegant as the ladies of Downton.
Loading...
or
Not Currently Available for Direct Purchase