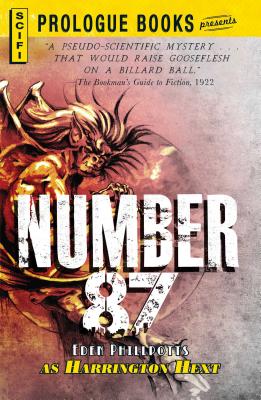 A thrilling tale from the author who inspired Alfred Hitchcock!

The Club of Friends may not have liked Alexander Skeat very much, but no one should meet his Maker so violently, so mysteriously....

Though Skeat may have been the first, he wouldn't be the last. Found dead in London with no wounds but a small incision beneath his shoulder, Skeat's demise was written off by many at first. But when the gentlemen of the Club of Friends thought more about the account of the policeman who found him--of the black, winged creature hulking over Skeat's body--they realized there must be more to the crime than they'd imagined.

It takes little time for panic to stretch across London, Europe, and the world as its attacks range wider and occur with greater frequency. Is it really "the Bat," as it becomes known, that obliterates the Alfred Memorial? Common science seems helpless, but then, this is no common beast!

Eden Phillpotts was born in India in 1862, but hailed from the United Kingdom from his early childhood forward. Known as a prolific young adult and mystery novelist, he penned about 250 works in his lifetime, including the beloved Dartmoor series and The Farmer's Wife, a comic play that Alfred Hitchcock later directed as a silent film. Later in his career, he explored his modern philosophy in a wealth of fantasy and early science fiction novels.
Loading...
or
Not Currently Available for Direct Purchase