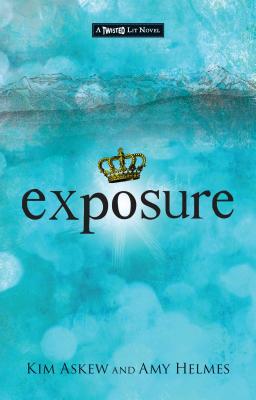 Double, double, toil, and trouble! The quest for high-school royalty can turn deadly when teen ambition outstrips reason. Skye Kingston is a shy shutterbug who prefers observing life from behind her camera lens. She doesn't know she's stunning, and comes off the sidelines only when she's forced to by the terrifying events of one treacherous school year in Alaska. A boy named Duncan is dead, and his death may or may not be an accident. Skye's three new best friends are eerily able to foretell the future, and cheerleader Beth might be more than a social climber--she quite probably is a sociopath. Then there's Skye's growing attraction to the school hottie, Craig, The Boy Who Would Be Prom King. But their time is crossed by fate. There's already been one death, and who can say if it's only the first? As Skye falls for Craig, she also slowly realizes that he is caught in the crosshairs of a deadly plot. Can she save Craig and herself from a murderous fate? Exposure is not only a modern take on the classic Macbeth, it's proof that nothing has changed since Shakespeare riffed on the subject nearly half a millennium ago: the quest for power can lead to bloodstained hands.

"Exposure is an intelligent, poignant, and riveting mashup of Shakespearean tragedy and high-school politics, which, as it turns out, have a lot in common." ~Daria Snadowsky, author of Anatomy of a Boyfriend and Anatomy of a Single Girl

"Kim Askew and Amy Helmes write with a delightful assurance in this clever and thrilling second installment in their Twisted Lit series. Wherever he is, the Bard is smiling down on them." ~Andrea N. Richesin, editor of Crush: 26 Real-Life Tales of First Love

"Death, betrayal, ruthless plots to seize the 'crown' - all the seeds of stage tragedy take root and flourish in this clever modern-day homage to Macbeth. High school is rife with just enough passion and treachery to set a suitable stage for some Shakespearean-level drama." --Kirkus Reviews

"Fun-filled escapades into Shakespeare's The Tempest and Macbeth . . . they're an absolute riot! You don't have to be a Shakespeare fan (I'm not) or even have read these plays (I haven't) to fall in love with these books. I can't wait for the next Twisted Lit adventure. It's the best new young adult series of the year!" --Jack and Jill Magazine

"Askew and Helmes' adaptation adds a certain zest to the original play. Through well-paced writing, complicated romance, and a relatable protagonist, the reader has the ability to view a literary classic in a new and enjoyable way. I would recommend Exposure to readers that are interested in modern adaptations of Shakespearean plays in the young adult age group." --Blogcritics

"Exposure clicked with me right away. There's a lot to like in this novel...the events fell into place not by design, but as a series of choices, actions, and reactions that led naturally from each other. Equal parts teen drama and classic adaptation, I could definitely see this actually being a movie on par with 10 Things I Hate About You." --Drown My Books

"In the second book of the Twisted Lit series, Kim Askew and Amy Helmes brings an interesting adaptation of Shakespeare's Macbeth. Overall Exposure is a great read. It says so much about ambition, guilt, betrayal, and love in an enjoyable well-paced story that'll definitely leave you satisfied." --SAB Book Reviews

"After reading the witty and enchanting Tempestuous . . . I was beyond excited to read Exposure. Exposure turned out to be a great follow-up novel . . . fun characters, a little romance, and a tad bit of mystery. Exposure is another fast paced and fun read, perfect for fans of Meg Cabot." --Lauren's Crammed Bookshelf blog

"A fun YA twist on Shakespeare in the same modern vein as the movie 10 Things I Hate About You." --Excellent Library blog

"Shakespeare is hot again. Merit Press . . . is basing two of its first five debut releases on Shakespeare retellings. Tempestuous [is] a humorous reimagining of The Tempest. The Twisted Lit novels hope to . . . make Shakespeare more appealing to today's teens. Expect to see Shakespeare throughout all forms of media in 2013 as a new generation of media consumer rediscovers the timeless literary treasures of William Shakespeare." --Forbes.com

"This is an entertaining read.... Readers don't need to be familiar with the play in order to enjoy this, but students who have read it will appreciate the many Shakespearean references throughout." --School Library Journal

New York Times bestselling author Jacquelyn Mitchard has written many novels for adults, including Two If by Sea. She has also written young adult novels; children’s books; a memoir, Mother Less Child; and a collection of essays, The Rest of Us: Dispatches from the Mother Ship. Her first novel, The Deep End of the Ocean, was the inaugural selection of the Oprah Winfrey Book Club, later adapted for a feature film starring and produced by Michelle Pfeiffer. Mitchard is the editor in chief and co-creator of Merit Press and a professor of fiction and creative nonfiction at Vermont College of Fine Arts in Montpelier. She lives on Cape Cod with her husband and their nine children.
Loading...
or support indie stores by buying on