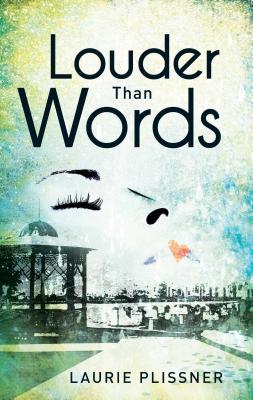 A girl with no voice, only one friend, and a synthetic speech machine that makes her sound like a robot--definitely not prom queen material. So traumatized on the night of the car wreck that killed her entire family that she lost her ability to speak and most of her memories, seventeen-year-old Sasha faces a lonely, quiet future...until she meets a beautiful boy who can literally read her mind.

Praise For Louder Than Words…

"Laurie Plissner's Louder Than Words is a fantastic debut. Plissner's writing style is witty, modern, and touching. Plissner manages to engage her reader with a smart and grieving protagonist, and a climax that will take the reader's breath away." --Blogcritics

"Author Laurie Plissner's debut novel portrays a defensive and smart-mouthed yet funny girl, damaged by tragedy, whose journey to recover her lost memories includes rediscovering herself. The protagonist's shocking findings are both frightening and dangerous, and the nonstop action draws the story to a most unlikely and terrifying ending." --New York Journal of Books

"Part medical drama, part mystery, part love story, Plissner takes us on a journey of young love and putting the pieces back together to reclaim your life. This is a quick read with an interesting premise and great characters. Great book which I completely recommend as a must read." --Maria's Space blog

"First, I found the premise to be totally unique and I loved reading everything from Sasha's perspective. I would suggest a mature teen audience." --Minding Spot blog

"This was an interesting book. I liked the mystery as to whether Sasha would ever recover her voice, as well as the mystery over whether there was someone else involved in Sasha's family's accident." --Sarah Elizabeth's Bookshelf

"Laurie Plissner's Louder Than Words is a fantastic debut for the older young adult audience. Plissner's writing style is witty, modern, and touching. Plissner manages to engage her reader with a smart and grieving protagonist, and a climax that will take the reader's breath away. Witty and unapologetic, Plissner's novel is a realistic representation of the teenage world: imperfect and complicated." --Book Addict blog

"Just from reading the synopsis, I knew that this was going to be a good story. The emotions going on in this book is a roller coaster ride; I didn't know what to expect at the next turn! Both characters are strong, which keeps the story blooming. This book is quite memorable, and I'd recommend it to anyone." --Bookworm 1858 blog

"I was really surprised by the layers in this novel. It's a psychological thriller, it's a romance, it's a mystery. I found that strong bond between teen and parent figures to be so refreshing--it's not something you see often in YA literature.... This is a great debut novel and a standalone that is perfect for those who are looking to read something out of the box. It's such a pleasant treat to stumble upon a novel that isn't like anything else out there!" – Christi, The Teen Librarian blog

"The characters were absolutely wonderful. The story was delightfully crafted with that special Shakespearean humor and banter but modernized. Tempestuous was an amusing and interesting read. A fantastic take on a classic with a magic all its own. Highly recommended to anyone looking for a fun, fluffy read with a little meat to it." --Refracted Light Reviews

"Sasha is a feisty character with a sense of humor." - School Library Journal