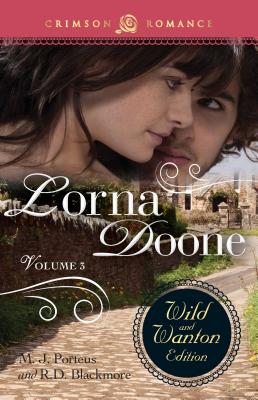 The Wild And Wanton Edition Volume 3

On the border of the English counties of Devon and Somerset, John Ridd’s father is a yeoman farmer murdered in cold blood by a member of the notorious Doone family. John is besotted with Lorna, the granddaughter of the head of the Doone clan, who is to be forced to marry the evil Carver Doone. John helps Lorna escape, but circumstances lead to the discovery that she is not a Doone after all, and the newfound heiress moves. But the Monmouth Rebellion finds John wrongly accused of treason and he has to clear his name in London, where he finds Lorna once more and where their love is rekindled. He is granted a royal pardon, and later Lorna is allowed to join him at his Exmoor farm. Just as they are married in Oare church, Carver Doone shoots Lorna at the altar and John, believing her dead, pursues and kills him. But is his love really dead?

Although Lorna Doone is perceived as a romance, it is set in the 1600s, when writings about sexual life at the court and personal diaries such as those of Pepys could be incredibly graphic, even by today’s standards. They were especially scandalous in the prudish Victorian times of the author. Had Blackmore written it in the seventeenth century, or in modern times, he probably would have done so similarly to this updated version and built on the existing innuendo.