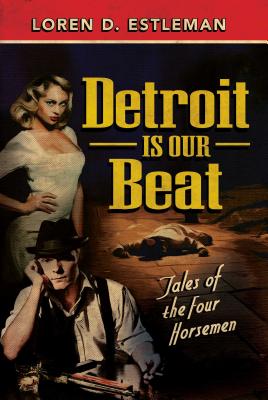 Detroit Is Our Beat

Tales of the Four Horsemen

While most of the police department is fighting overseas, the four men of the Racket Squad struggle to keep a lid on a powderkeg stuffed with draft-dodging troublemakers, Black Market gangsters, enemy saboteurs, and a mixed bag of racial and ethnic groups working uneasily side by side in defense plants run by the automobile industry.

With blackjacks, brass knuckles, tommy guns, and their bare fists, Lieutenant Max Zagreb, Sergeant Starvo Canal, and detectives McReary and Burke--known collectively as the "Four Horsemen"--battle their way through ten gritty stories in the hardest-boiled town during the twentieth century's hardest-boiled decade.

Praise For Detroit Is Our Beat: Tales of the Four Horsemen…

"The 10 stories collected here represent all manner of mayhem.... Estleman knows Detroit inside out, and he is at his best among tough guys, hard women, and snappy dialogue delivered in smoke-filled rooms." --Booklist

"An engaging look at World War II Detroit and the men who were left to safeguard it while others fought overseas. Estleman's marvelous collection showcases his knowledge of this gutsy city, both past and present, that is guaranteed to please crime noir fans as well as history buffs." --Library Journal

"[Estleman's] precise ear for dialogue is on display with the snappy, sarcastic banter between the Squad and the other characters that is reminiscent of a Howard Hawks movie. This is a 'must have' for the legion of Estleman readers, fans of the period or simply admirers of well-written short stories. And another excellent, note-worthy addition to Estleman's many and varied contributions to crime fiction." --Bookgasm.com

"Loren D. Estleman's short story collection, Detroit Is Our Beat: Tales of the Four Horsemen, skillfully captures the hard boiled vibe of some of the best detective fiction of the 1940s. It is a quite impressive tour de force. Estleman has a fine ear for lively descriptive language. Not only are the stories in Detroit Is Our Beat well written, they will keep you guessing and often surprise you at the end." --Blogcritics.org

An authority on both criminal history and the American West, Loren D. Estleman has been called the most critically acclaimed author of his generation. He has been nominated for the National Book Award and the Mystery Writers of America's Edgar Allan Poe Award.
Loading...
or
Not Currently Available for Direct Purchase