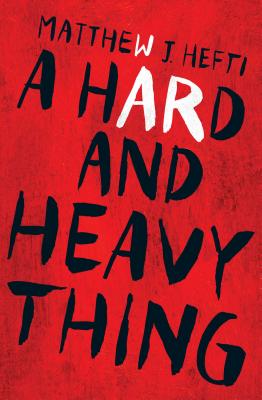 A Hard And Heavy Thing (Hardcover)

Contemplating suicide after nearly a decade at war, Levi sits down to write a note to his best friend Nick, explaining why things have to come to this inevitable end. Years earlier, Levi--a sergeant in the army--made a tragic choice that led his team into ambush, leaving three soldiers dead and two badly injured. During the attack, Levi risked death to save a badly burned and disfigured Nick. His actions won him the Silver Star for gallantry, but nothing could alleviate the guilt he carried after that fateful day. He may have saved Nick in Iraq, but when Levi returns home and spirals out of control, it is Nick's turn to play the savior, urging Levi to write. Levi begins to type as a way of bidding farewell, but what remains when he is finished is not a suicide note. It's a love song, a novel in which the beginning is the story's end, the story's end is the real beginning of Levi's life, and the future is as mutable as words on a page.

In the past twelve years, Matthew J. Hefti has been deployed twice to the Sunni Triangle in Iraq and twice to the battlefields of Afghanistan. While there, he worked with Brian Castner, author of The Long Walk. In addition to defusing bombs during active duty, Hefti went to school part-time and earned a BA in English and an MFA in creative writing. He had a brief piece in MFA vs. NYC and has a story forthcoming in the second volume of Fire and Forget: Short Stories from the Long War.

Praise For A Hard And Heavy Thing…

"America's Asian wars have already inspired fine novels, and this debut effort is an intense, compelling addition. Hefti was an explosive ordnance disposal technician deployed to Afghanistan and Iraq twice, and his depiction of life and death in the misbegotten Iraq invasion stay with readers for a long time." --Booklist, Starred Review

"A timeless American story...[that] rings with an honesty that is earnest and smart and sad. This novel is so true to itself it hurts." --Brian Castner, author of The Long Walk

"Hefti writes with an urgency that demands attention and ultimately breaks the heart." --Elliot Ackerman, author of Green on Blue

"...intellectually engaging in a way that almost no other war story can claim... The tension builds, and as the story goes on, the story-beneath-the-story asserts itself...in longer and more muscular asides." --Adrian Bonenberger, contributor to the New York Times, the Washington Post, Publishers Weekly, and author of Afghan Post

"There is a poignancy and an urgency to the epistolary novel form that is hard to replicate in any other.... Hefti is able to take a small, intimate idea--a man's desire to explain himself...and use it to explore large spiritual and philosophical themes." --Military Spouse Book Review

"Matthew J. Hefti has given combatants an authentic and heartbreaking voice that manages to tell a war story of intimate and human proportions. Hefti seamlessly weaves excerpts from this suicide note into the novel's narrative." --Shelf Awareness, Starred Review

"This former soldier's first novel is distinctive in concept and structure." --Military Times

"True to its title, this book is heavy going...you can feel the weight of Levi's despair, but there is also redemption and hope.... Hefti's success is all the more remarkable because the characters in his novel are distinctly unlikable. Sprinkled with bracketed asides to Nick, Levi's brotherly love for his friend is beautifully expressed throughout the story." --Consequence Magazine
or
Not Currently Available for Direct Purchase
Copyright © 2020 American Booksellers Association