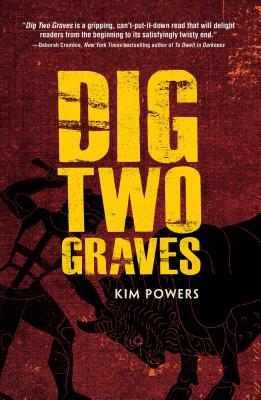 "...a unique hybrid of James Patterson, Dan Brown, and Harlan Coben--with a wit and intelligence that are all Powers." --Louis Bayard, author of Mr. Timothy and The Pale Blue Eye

In his twenties, Ethan Holt won the decathlon at the Olympics and was jokingly nicknamed "Hercules"; now, in his late thirties, he's returned to his ivy-covered alma mater to teach, and to raise his young daughter Skip as a single father. After a hushed-up scandal over his Olympics win and the death of his wife in a car accident five years ago, Ethan wants nothing more than to forget his past. Skip is not only the light of Ethan's life--she is his life. Then, Skip is kidnapped. A series of bizarre ransom demands start coming in that stretch Ethan's athletic prowess to its limits, and he realizes with growing horror that they are modern versions of the Twelve Labors of Hercules, demanded in tricky, rhyming clues by someone who seems to have followed every step of Ethan's career.

Praise for the work of Kim Powers

"This is a riveting memoir, sensitive, wise and unsparing." --Diane Sawyer

"Powers's strength in relating his own personal struggles within the context of his twin's holds this unique memoir together." --Publishers Weekly

"A haunting memoir...Powers writes with insight and intelligence about his brother's flaws and fears and the telepathic tendencies of souls separated by a few breaths." --Booklist

"I thought I knew the story of Truman Capote and Harper Lee. I was wrong. Kim Powers brilliantly brings their strange relationship alive in a way a standard-issue biography never could. Weaving together fact, speculation and fantasy, he creates a sort of emotional biography that will haunt you long after the last page…just as the ghosts of the slain Clutters must have haunted them." --Oscar Hijuelos, Pulitzer Prize winner for The Mambo Kings Sing Songs of Love and Mr. Ives' Christmas

"Connections to Greek mythology add a deeper element to the kidnapping plot...and the eventual truth about the kidnapper is quite a shocking reveal.... Enough adrenaline to please fans of Dan Brown and those who appreciate thrillers with literary roots." --Kirkus Reviews

"The usual suspense-building kidnapping plot elements are in play here, but they are executed well.... The story keeps the reader engaged. This should appeal to readers who enjoy Harlan Coben's or Linwood Barclay's suburban thrillers." --Booklist

"Powers (The History of Swimming; Capote in Kansas) has crafted an unusually lyrical mystery. Each character is sharply and precisely drawn; the language is carefully polished. The denouement brings to mind the works of Scott Turow or John Lescroat." --Library Journal

"Thrilling, suspense-filled debut novel...keep[s] readers on the edge of their seat at all times. Readers are easily able to sympathize with Ethan over the loss of his daughter as well as experience Skip's terror firsthand." --Killer Nashville Book of the Day

"Powers knows his business. Dig Two Graves has everything you would expect from a seasoned thriller pen: cliff hangers, surprises, twists, and red herrings. It has the kind of plot that makes a book hard to put down. Powers is adept at creating believable characters...everything necessary for an impressive debut. He uses the conventions of the thriller with intelligence.... One heck of a read." --Blogcritics

Kim Powers is the author of Rules for Being Dead, Dig Two Graves, Capote in Kansas, and the critically acclaimed memoir The History of Swimming. He has also received two Emmys for his work at both Good Morning America and 20/20, where he is currently senior writer. He splits his time between New York City and Asbury Park, New Jersey.
Loading...
or
Not Currently Available for Direct Purchase