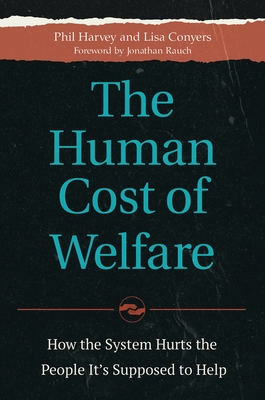 The Human Cost of Welfare (Hardcover)

How the System Hurts the People It's Supposed to Help

Unlike other books on welfare, this one draws on the stories of more than 100 welfare recipients who are trapped in a system that keeps them underemployed and unemployed. The authors present case studies that show that being a part of a welfare program can actively result in the recipient having to limit their job efforts for fear of losing government assistance. The book examines all major U.S. welfare systems, including Temporary Assistance for Needy Families, SNAP, Medicaid, and others.

The authors begin by exploring the nation's basic poverty issues and examining the relationship between work and happiness. Next, they zero in on specific welfare programs, reporting both on their dollar costs and on the ways that they fail enrollees. The book then concludes with strategies for addressing the shortcomings of the current U.S. welfare system. This book is appropriate for readers interested in public policy, government programs, welfare, and cultural shifts in America. It adds a new perspective to the existing body of welfare scholarship by systematically assessing the impact of welfare on the receivers themselves.

Phil Harvey is the chief sponsor of the DKT Liberty Project, an advocacy group that raises awareness about liberty and freedom in the United States.Lisa Conyers is director of policy studies for the DKT Liberty Project, where she works on topics including welfare, inequality, and civil liberties.
or
Not Currently Available for Direct Purchase
Copyright © 2020 American Booksellers Association