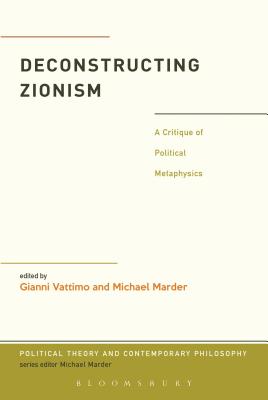 A Critique of Political Metaphysics (Political Theory and Contemporary Philosophy)

This volume in the Political Theory and Contemporary Philosophy series provides a political and philosophical critique of Zionism.

While other nationalisms seem to have adapted to twenty-first century realities and shifting notions of state and nation, Zionism has largely remained tethered to a nineteenth century mentality, including the glorification of the state as the only means of expressing the spirit of the people. These essays, contributed by eminent international thinkers including Slavoj Zizek, Luce Irigaray, Judith Butler, Gianni Vattimo, Walter Mignolo, Marc Ellis, and others, deconstruct the political-metaphysical myths that are the framework for the existence of Israel.Collectively, they offer a multifaceted critique of the metaphysical, theological, and onto-political grounds of the Zionist project and the economic, geopolitical, and cultural outcomes of these foundations. A significant contribution to the debates surrounding the state of Israel today, this groundbreaking work will appeal to anyone interested in political theory, philosophy, Jewish thought, and the Middle East conflict.

Gianni Vattimo is emeritus professor of philosophy at the University of Turin and a member of the European Parliament. He is the author of Hermeneutic Communism (co-authored with S. Zabala), A Farewell to Truth; The Responsibility of the Philosopher; Christianity, Truth, and Weakening Faith (with R. Girard); Not Being God: A Collaborative Autobiography (with P. Paterlini); Art's Claim to Truth; After the Death of God (with John D. Caputo); Dialogue with Nietzsche; The Future of Religion (with Richard Rorty); Nihilism and Emancipation: Ethics, Politics, and Law; and After Christianity.Michael Marder is Ikerbasque Research Professor in the Department of Philosophy at the University of the Basque Country, Vitoria-Gasteiz. He is the Associate Editor of Telos: A Quarterly Journal of Critical Thought and the author of The Event of The Thing: Derrida's Post-Deconstructive Realism (2009).
Loading...
or
Not Currently Available for Direct Purchase