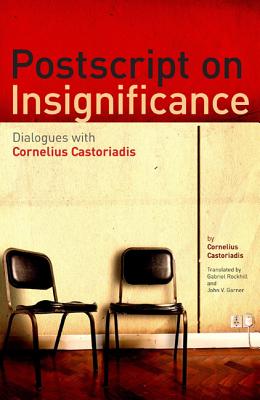 Cornelius Castoriadis (1922-1997) was a philosopher, social critic, political activist, practicing psychoanalyst and professional economist. His work is widely recognized as one of the most singular and important contributions to twentieth-century thought.

In this collection of interviews, Castoriadis discusses some of his most important ideas with leading figures in the disciplines that play such a crucial part in his philosophical work: poetry, psychoanalysis, biology and mathematics. Available in English for the first time, these interviews provide a concise and accessible introduction to his work as a whole, allowing him to draw on the astounding breadth of his knowledge (ranging from political theory and sociology to ontology and the philosophy of science). They also render Castoriadis' cutting, polemical and entertaining style while displaying the originality and clarity of his primary concepts. Intellectually provoking, this timely collection shows how Castoriadis' polemics are sharp and riveting, his conceptual manoeuvres rigorous and original, and his passion inspiring. This is an excellent introduction to one of Europe's most important intellectuals.