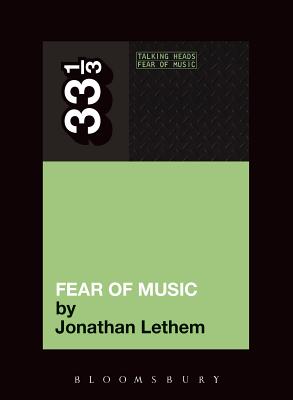 It's the summer of 1979. A fifteen-year-old boy listens to WNEW on the radio in his bedroom in Brooklyn. A monotone voice (it's the singer's) announces into dead air in between songs The Talking Heads have a new album, it's called Fear of Music - and everything spins outward from that one moment.

Jonathan Lethem treats Fear of Music (the third album by the Talking Heads, and the first produced by Brian Eno) as a masterpiece - edgy, paranoid, funky, addictive, rhythmic, repetitive, spooky and fun. He scratches obsessively at the album's songs, guitars, rhythms, lyrics, packaging, downtown origins, and legacy, showing how Fear of Music hints at the directions (positive and negative) the band would take in the future. Lethem transports us again to the New York City of another time - tackling one of his great adolescent obsessions and illuminating the ways in which we fall in and out of love with works of art.

Jonathan Lethem is one of the most acclaimed American novelists of his generation. His books include Motherless Brooklyn, The Fortress of Solitude, and Chronic City. His essays about James Brown and Bob Dylan have appeared in Rolling Stone. He is Roy Edward Disney Professor in Creative Writing at Pomona College, US.
Loading...
or support indie stores by buying on