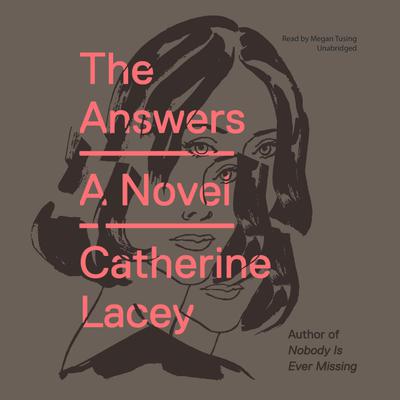 In Catherine Lacey's ambitious second novel we are introduced to Mary, a young woman living in New York City struggling with a body that has betrayed her. All but paralyzed with pain, Mary seeks relief from a New Age-y treatment called Pneuma Adaptive Kinesthesia, PAKing for short. And, remarkably, it works.

But PAKing is expensive and Mary is broke. So she scours Craigslist for fast-cash jobs and finds the "Girlfriend Experiment," the brainchild of an eccentric and narcissistic actor determined to find the perfect relationship-even if it means paying women to fill different roles. Mary is hired as the "emotional girlfriend"-certainly better than the "anger girlfriend" or the "maternal girlfriend"-and is pulled into an ego-driven and messy attempt at human connection.

Told in Lacey's signature spiraling prose, The Answers is full of singular yet universal insights. It is a gorgeous hybrid of the plot- and idea-driven novel that will leave you reeling.

Catherine Lacey is a novelist and author whose work has appeared in Guernica, the Atlantic, the Believer, the New York Times, McSweeney’s Quarterly, the Paris Review online, Electric Literature, and many others. She was named a “New Voice” by Granta in 2014 and has earned fellowships from the New York Foundation for the Arts and Columbia University, where she earned an MFA in nonfiction.