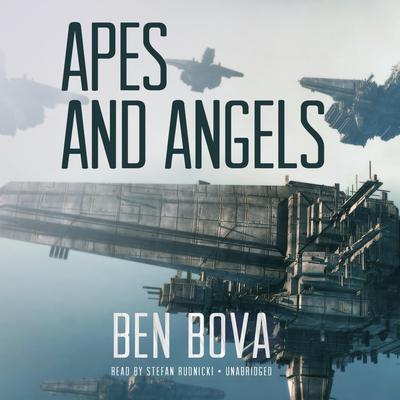 Six-time Hugo Award winner Ben Bova chronicles the saga of humankind's expansion beyond the solar system in Apes and Angels, the last installment in the Star Quest Trilogy.

A wave of death is spreading through the Milky Way galaxy, an expanding sphere of lethal gamma radiation that erupted from the galaxy's core twenty-eight thousand years ago and now is approaching Earth's vicinity at the speed of light. Every world it touched was wiped clean of all life. But it's possible to protect a planet from gamma radiation. Earth is safe.

The crew of the Odysseus has arrived at Mithra Gamma, the third planet of the star Mithra, to protect the stone-age inhabitants from the Death Wave. But they'll also have to protect themselves.

Ben Bova was
born in Philadelphia and received his doctorate in education from California
Coast University in 1996. The author of over 120 futuristic novels and
nonfiction books, he has also been a radio commentator, editor, lecturer, and
aerospace industry executive. His articles, opinion pieces, and reviews have
appeared in Scientific American, Nature, the New York Times, the Wall
Street Journal
, and many other publications. His work has earned six Hugo Awards. He received the Lifetime
Achievement Award of the Arthur C. Clarke Foundation in 2005, and his novel Titan won the John W. Campbell Memorial
Award for the best science fiction novel of 2006.