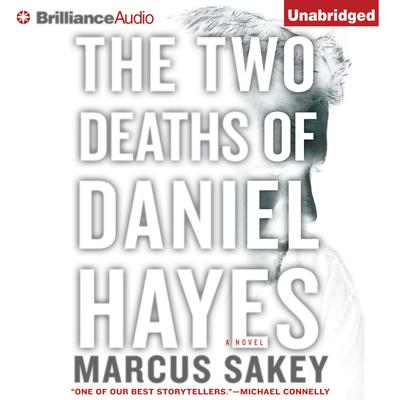 The only sign of life for miles is an empty BMW. Inside the expensive car he finds clothes that fit perfectly, shoes for his tattered feet, a Rolex, and an auto registration in the name of Daniel Hayes, resident of Malibu, California.
None of it is familiar.

How did he get here? Who is he? Who was he? While he searches for answers, the world searches for him - beginning with the cops that kick in the door of his dingy motel with guns drawn. Lost and alone, the man who might be Daniel Hayes flees into the night.

All he remembers is a woman’s face, so he sets off for the only place he might find her. The fantasy of her becomes his home, his world, his hope. And maybe, just maybe, the way back to himself.

But that raises the most chilling question of all: What will he find when he gets there?

PRAISE FOR MARCUS SAKEY & THE TWO DEATHS OF DANIEL HAYES

“CONFIRMS MARCUS SAKEY’S PLACE AS ONE OF OUR BEST.”—MICHAEL CONNELLY
“Sakey writes like a dream, creates characters exactly like people you know, and above all he keeps you turning the pages.” —Lee Child
“PART DAZZLING CALIFORNIA NOIR, PART DARK AMERICAN ROAD TRIP, PART PSYCHOLOGICAL THRILLER — AND ENTIRELY INGENIOUS.”—GILLIAN FLYNN
“AS MUCH AN EXAMINATION OF MORALITY AS IT IS A THRILLER.”—PITTSBURGH TRIBUNE-REVIEW