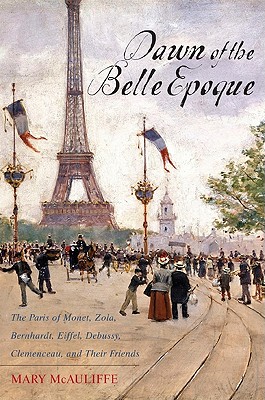 Dawn of the Belle Epoque (Hardcover)

The Paris of Monet, Zola, Bernhardt, Eiffel, Debussy, Clemenceau, and Their Friends

A humiliating military defeat by Bismarck's Germany, a brutal siege, and a bloody uprising--Paris in 1871 was a shambles, and the question loomed, "Could this extraordinary city even survive?" Mary McAuliffe takes the reader back to these perilous years following the abrupt collapse of the Second Empire and France's uncertain venture into the Third Republic. By 1900, Paris had recovered and the Belle Epoque was in full flower, but the decades between were difficult, marked by struggles between republicans and monarchists, the Republic and the Church, and an ongoing economic malaise, darkened by a rising tide of virulent anti-Semitism. Yet these same years also witnessed an extraordinary blossoming in art, literature, poetry, and music, with the Parisian cultural scene dramatically upended by revolutionaries such as Monet, Zola, Rodin, and Debussy, even while Gustave Eiffel was challenging architectural tradition with his iconic tower. Through the eyes of these pioneers and others, including Sarah Bernhardt, Georges Clemenceau, Marie Curie, and C sar Ritz, we witness their struggles with the forces of tradition during the final years of a century hurtling towards its close. Through rich illustrations and evocative narrative, McAuliffe brings this vibrant and seminal era to life.

Mary McAuliffe received a Ph.D. in history from the University of Maryland and has taught at several universities and lectured at the Smithsonian Institution. For many years she was a regular contributor to Paris Notes. She has traveled extensively in France and is the author of Paris Discovered: Explorations in the City of Light. She lives in New York City with her husband.
or
Not Currently Available for Direct Purchase
Copyright © 2020 American Booksellers Association