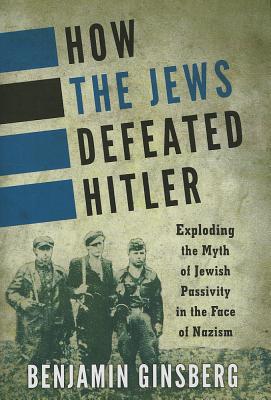 How the Jews Defeated Hitler (Hardcover)

Exploding the Myth of Jewish Passivity in the Face of Nazism

One of the most common assumptions about World War II is that the Jews did not actively or effectively resist their own extermination at the hands of the Nazis. In this powerful book, Benjamin Ginsberg convincingly argues that the Jews not only resisted the Germans but actually played a major role in the defeat of Nazi Germany. The question, he contends, is not whether the Jews fought but where and by what means. True, many Jews were poorly armed, outnumbered, and without resources, but Ginsberg shows persuasively that this myth of passivity is solely that-a myth. The author describes how Jews resisted Nazism strongly in four major venues. First, they served as members of the Soviet military and as engineers who designed and built many pivotal Soviet weapons, including the T-34 tank. Second, a number were soldiers in the U.S. armed forces, and many also played key roles in discrediting American isolationism, in providing the Roosevelt administration with the support it needed for preparing for war, and in building the atomic bomb. Third, they made vital contributions to the Allies-the Soviet Union, the United States, and Britain-in espionage and intelligence (especially cryptanalysis), and fourth, they assumed important roles in several European anti-Nazi resistance movements that often disrupted Germany's fragile military supply lines. In this compelling, cogent history, we discover that the Jews were an important factor in Hitler's defeat.

Benjamin Ginsberg is David Bernstein Professor of Political Science and Chair of the Center for Advanced Governmental Studies at Johns Hopkins University. His many books include The Fall of the Faculty, Presidential Power: Unchecked and Unbalanced, and Downsizing Democracy: How America Sidelined Its Citizens and Privatized Its Public.
or support indie stores by buying on
Copyright © 2020 American Booksellers Association