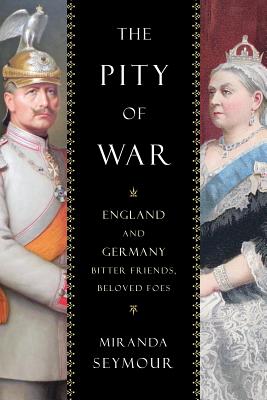 The Pity of War

In 1613, a beautiful Stuart princess married a handsome young German prince. This was a love match, but it was also an alliance that aimed to meld Europe's two great Protestant powers. Before Elizabeth and Frederick left London for the court in Heidelberg, they watched a performance of The Winter's Tale. In 1943, a group of British POWs gave a performance of that same play to a group of enthusiastic Nazi guards in Bavaria. Nothing about the story of England and Germany, as this remarkable book demonstrates, is as simple as we might expect. Miranda Seymour tells the forgotten story of England's centuries of profound connection and increasingly rivalrous friendship with Germany, linked by a shared faith, a shared hunger for power, a shared culture (Germany never doubted that Shakespeare belonged to them, as much as to England), and a shared leadership. German monarchs ruled over England for three hundred years--and only ceased to do so through a change of name. This extraordinary and heart-breaking history--told through the lives of princes and painters, soldiers and sailors, bakers and bankers, charlatans and saints--traces two countries so entwined that one German living in England in 1915 refused to choose where his allegiance lay. It was, he said, as if his parents had quarreled. Germany's connection to the island it loved, patronized, influenced, and fought was unique. Indeed, British soldiers went to war in 1914 against a country to which many of them--as one freely confessed the week before his death on the battlefront--felt more closely connected than to their own. Drawing on a wealth of unpublished papers and personal interviews, the author has uncovered stories that remind us--poignantly, wittily, and tragically--of the powerful bonds many have chosen to forget.

Miranda Seymour is a biographer, novelist, and reviewer. She is a fellow of the Royal Society of Literature and recipient of the Pen Ackerley Memoir of the Year Prize for Thrumpton Hall, her extraordinary account of life at the family manor, which she now runs as a successful conference and wedding business. Her other acclaimed biographies include lives of Mary Shelley, Henry James, Robert Graves, Ottoline Morrell, and Helle Nice, the Bugatti Queen. Her interest in the history of the relationship between England and Germany was triggered by her own background. In 1931, her English uncle was (inadvertently) almost responsible for Hitler's death. His marriage to a German woman led Miranda on a quest for her family's German links, which had been neglected and forgotten following World War II.
Loading...
or
Not Currently Available for Direct Purchase