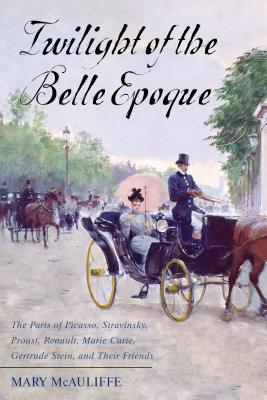 Twilight of the Belle Epoque

The Paris of Picasso, Stravinsky, Proust, Renault, Marie Curie, Gertrude Stein, and Their Friends through the Great Wa

Mary McAuliffe's Dawn of the Belle Epoque took the reader from the multiple disasters of 1870-1871 through the extraordinary re-emergence of Paris as the cultural center of the Western world. Now, in Twilight of the Belle Epoque, McAuliffe portrays Paris in full flower at the turn of the twentieth century, where creative dynamos such as Picasso, Matisse, Stravinsky, Debussy, Ravel, Proust, Marie Curie, Gertrude Stein, Jean Cocteau, and Isadora Duncan set their respective circles on fire with a barrage of revolutionary visions and discoveries. Such dramatic breakthroughs were not limited to the arts or sciences, as innovators and entrepreneurs such as Louis Renault, Andr Citro n, Paul Poiret, Fran ois Coty, and so many others-including those magnificent men and women in their flying machines-emphatically demonstrated. But all was not well in this world, remembered in hindsight as a golden age, and wrenching struggles between Church and state as well as between haves and have-nots shadowed these years, underscored by the ever-more-ominous drumbeat of the approaching Great War-a cataclysm that would test the mettle of the City of Light, even as it brutally brought the Belle Epoque to its close. Through rich illustrations and evocative narrative, McAuliffe brings this remarkable era from 1900 through World War I to vibrant life.

Mary McAuliffe holds a PhD in history from the University of Maryland, has taught at several universities, and has lectured at the Smithsonian Institution. She has traveled extensively in France, and for many years she was a regular contributor to Paris Notes. Her books include Paris Discovered, Dawn of the Belle Epoque, and Clash of Crowns. She lives in New York City with her husband.
Loading...
or support indie stores by buying on