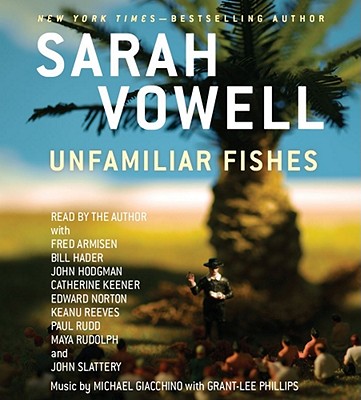 
“Vowell makes an excellent travelling companion, what with her rare combination of erudition and cheek.”
—The New York Times Book Review

Of all the countries the United States invaded or colonized in 1898, Vowell considers the story of the Americanization of Hawaii to be the most intriguing. From the arrival of the New England missionaries in 1820, who came to Christianize the local heathen, to the coup d’état led by the missionaries’ sons in 1893, overthrowing the Hawaiian queen, the events leading up to American annexation feature a cast of beguiling if often appalling or tragic characters. Whalers who will fire cannons at the Bible-thumpers denying them their god-given right to whores. An incestuous princess pulled between her new god and her brother-husband. Sugar barons, con men, Theodore Roosevelt, and the last Hawaiian queen, a songwriter whose sentimental ode “Aloha ‘Oe” serenaded the first Hawaii-born president of the United States during his 2009 inaugural parade.

With Vowell’s trademark wry insights and reporting, she lights out to discover the odd, emblematic, and exceptional history of the fiftieth state. In examining the place where Manifest Destiny got a sunburn, she finds America again, warts and all.

John Slattery has starred on Broadway in Rabbit Hole, Betrayal, and Laughter on the 23rd Floor. Off-Broadway credits include Three Days of Rain (L.A. Critics Award, Drama Desk nom.), and The Lisbon Traviata. On television he has been seen in Ed, K Street, Sex & the City, and Will & Grace. Films include Flags of Our Fathers, Mona Lisa Smile, The Station Agent,Traffic, and Sleepers.
Loading...
or
Not Currently Available for Direct Purchase