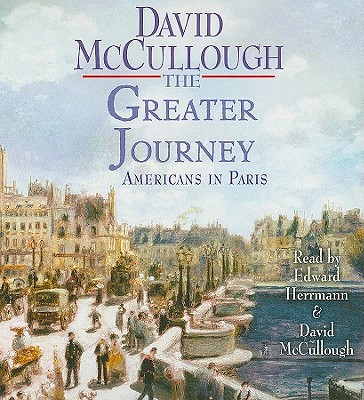 The #1 bestseller that tells the remarkable story of the generations of American artists, writers, and doctors who traveled to Paris, fell in love with the city and its people, and changed America through what they learned, told by America’s master historian, David McCullough.

Not all pioneers went west.

In The Greater Journey, David McCullough tells the enthralling, inspiring—and until now, untold—story of the adventurous American artists, writers, doctors, politicians, and others who set off for Paris in the years between 1830 and 1900, hungry to learn and to excel in their work. What they achieved would profoundly alter American history.

Elizabeth Blackwell, the first female doctor in America, was one of this intrepid band. Another was Charles Sumner, whose encounters with black students at the Sorbonne inspired him to become the most powerful voice for abolition in the US Senate. Friends James Fenimore Cooper and Samuel F. B. Morse worked unrelentingly every day in Paris, Morse not only painting what would be his masterpiece, but also bringing home his momentous idea for the telegraph. Harriet Beecher Stowe traveled to Paris to escape the controversy generated by her book, Uncle Tom’s Cabin. Three of the greatest American artists ever—sculptor Augustus Saint-Gaudens, painters Mary Cassatt and John Singer Sargent—flourished in Paris, inspired by French masters.

Almost forgotten today, the heroic American ambassador Elihu Washburne bravely remained at his post through the Franco-Prussian War, the long Siege of Paris, and the nightmare of the Commune. His vivid diary account of the starvation and suffering endured by the people of Paris is published here for the first time.

Telling their stories with power and intimacy, McCullough brings us into the lives of remarkable men and women who, in Saint-Gaudens’ phrase, longed “to soar into the blue.”

Praise For The Greater Journey: Americans in Paris…

"An epic of ideas, as well as an exhilirating book of spells . . . This is history to be savored."

“An ambitious, wide-ranging study of how being in Paris helped spark generations of American genius. . . . A gorgeously rich, sparkling patchwork, eliciting stories from diaries and memoirs to create the human drama McCullough depicts so well.”

“A lively and entertaining panorama. . . . By the time he shows us the triumphant Exposition Universelle in 1889, witnessed through the eyes of such characters as painters John Singer Sargent and Robert Henri, we share McCullough's enthusiasm for the city and his affection for the many Americans who improved their lives, their talent and their nation by drinking at the fountain that was Paris.”

"From a dazzling beginning that captures the thrill of arriving in Paris in 1830 to the dawn of the 20th century, McCullough chronicles the generations that came, saw and were conquered by Paris. . . . The Greater Journey will satisfy McCullough's legion of loyal fans . . . it will entice a whole new generation of Francophiles, armchair travelers and those Americans lucky enough to go to Paris before they die."

"McCullough's skill as a storyteller is on full display. . . . The idea of telling the story of the French cultural contribution to America through the eyes of a generation of aspiring artists, writers and doctors is inspired. . . a compelling and largely untold story in American history."

"There is not an uninteresting page here as one fascinating character after another is explored at a crucial stage of his development. . . . Wonderful, engaging writing full of delighting detail."

“McCullough’s research is staggering to perceive, and the interpretation he lends to his material is impressive to behold. . . . Expect his latest book to ascend the best-seller lists and be given a place on the year-end best lists.”

“A highly readable and entertaining travelogue of a special sort, an interdisciplinary treat from a tremendously popular Pulitzer Prize-winning historian. . . . Highly recommended.”

“For more than 40 years, David McCullough has brought the past to life in books distinguished by vigorous storytelling and vivid characterizations. . . . . McCullough again finds a slighted subject in The Greater Journey, which chronicles the adventures of Americans in Paris. . . . Wonderfully atmospheric.”

“McCullough has hit the historical jackpot. . . . A colorful parade of educated, Victorian-era American travelers and their life-changing experiences in Paris.”