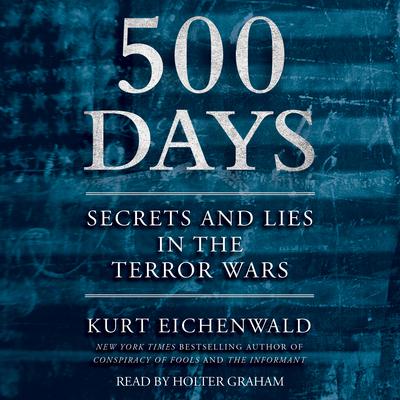 In 500 Days, master chronicler Kurt Eichenwald lays bare the harrowing decisions, deceptions, and delusions of the eighteen months that changed the world forever, as leaders raced to protect their citizens in the wake of 9/11.
Eichenwald’s gripping, immediate style and true-to-life dialogue puts readers at the heart of these historic events, from the Oval Office to Number 10 Downing Street, from Guantanamo Bay to the depths of CIA headquarters, from the al Qaeda training camps to the torture chambers of Egypt and Syria. He reveals previously undisclosed information from the terror wars, including never-before-reported details about warrantless wiretapping, the anthrax attacks, and investigations and conflicts among Washington, D.C., and London.
With his signature fast-paced narrative style, Eichenwald—whose book, The Informant, was called “one of the best nonfiction books of the decade” by The New York Times Book Review—exposes a world of secrets and lies that has remained hidden until now.

Kurt Eichenwald wrote for The New York Times for more than twenty years. A two-time winner of the George Polk Award for excellence in journalism, he was a finalist for the Pulitzer Prize in 2000 and 2002. He is the author of three New York Times bestselling books, one of which, The Informant, was made into a major motion picture starring Matt Damon. He lives in Dallas with his wife and three children.