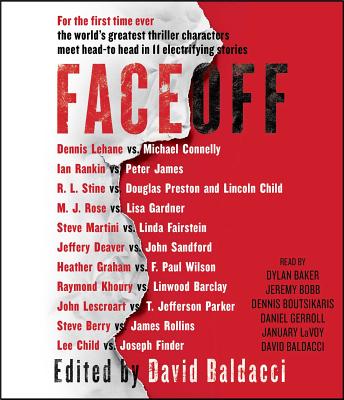 A New York Times and USA TODAY bestseller! Edited by #1 New York Times bestselling author David Baldacci and including stories by Michael Connelly, Lee Child, Jeffery Deaver, and more, this one-of-a-kind anthology pulls together the most beloved characters from the best and most popular thriller series today. Worlds collide!

In an unprecedented collaboration, twenty-three of the world’s bestselling and critically acclaimed thriller writers have paired their series characters—such as Harry Bosch, Jack Reacher, and Lincoln Rhyme—in an eleven-story anthology curated by the International Thriller Writers (ITW). All of the contributors to FaceOff are ITW members and the stories feature these dynamic duos:

· Patrick Kenzie vs. Harry Bosch in “Red Eye,” by Dennis Lehane and Michael Connelly
· John Rebus vs. Roy Grace in “In the Nick of Time,” by Ian Rankin and Peter James
· Slappy the Ventriloquist Dummy vs. Aloysius Pendergast in “Gaslighted,” by R.L. Stine, Douglas Preston, and Lincoln Child
· Malachai Samuels vs. D.D. Warren in “The Laughing Buddha,” by M.J. Rose and Lisa Gardner
· Paul Madriani vs. Alexandra Cooper in “Surfing the Panther,” by Steve Martini and Linda Fairstein
· Lincoln Rhyme vs. Lucas Davenport in “Rhymes With Prey,” by Jeffery Deaver and John Sandford
· Michael Quinn vs. Repairman Jack in “Infernal Night,” by Heather Graham and F. Paul Wilson
· Sean Reilly vs. Glen Garber in “Pit Stop,” by Raymond Khoury and Linwood Barclay
· Wyatt Hunt vs. Joe Trona in “Silent Hunt,” by John Lescroart and T. Jefferson Parker
· Cotton Malone vs. Gray Pierce in “The Devil’s Bones,” by Steve Berry and James Rollins
· Jack Reacher vs. Nick Heller in “Good and Valuable Consideration,” by Lee Child and Joseph Finder

He's received or been shortlisted for a number of awards around the world, including Novel of the Year by the International Thriller Writers and the Steel Dagger from the Crime Writers' Association in the United Kingdom. In 2014, he was the recipient of three lifetime achievement awards. A former journalist, folksinger, and attorney, he was born outside of Chicago and has a bachelor of journalism degree from the University of Missouri and a law degree from Fordham University.

Peter James is the #1 international bestselling author of the Roy Grace series, with more than eighteen million copies sold all over the world. His novels have been translated into thirty-seven languages and many are in development for TV and film including the Roy Grace series. All of his novels reflect his deep interest in the world of the police, with whom he does in-depth research. He lives in England.

Dylan Baker's films include Happiness, Along Came A Spider, and 13 Days. He starred on the TV series Feds and Murder One. Mr. Baker's theater credits include La Bete (Tony & Drama Desk nominations), Eastern Standard (Theatre World Award), and Not About Heroes (Obie Award).

Dennis Boutsikaris won an OBIE Award for his performance in Sight Unseen and played Mozart in Amadeus on Broadway. Among his films are *batteries not included, The Dream Team, and Boys On the Side. His many television credits include And Then There Was One, Chasing the Dragon and 100 Center Street.

David Baldacci is a worldwide bestselling novelist. With his books published in over 45 languages and in more than 80 countries, and with over 110 million copies in print, he is one of the world's favorite storytellers. David Baldacci is also the cofounder, along with his wife, of the Wish You Well Foundation, a nonprofit organization dedicated to supporting literacy efforts across America. Still a resident of his native Virginia, he invites you to visit him at www.DavidBaldacci.com, and his foundation at www.WishYouWellFoundation.org, and to look into its program to spread books across America at www.FeedingBodyandMind.com.
or
Not Currently Available for Direct Purchase
Copyright © 2020 American Booksellers Association