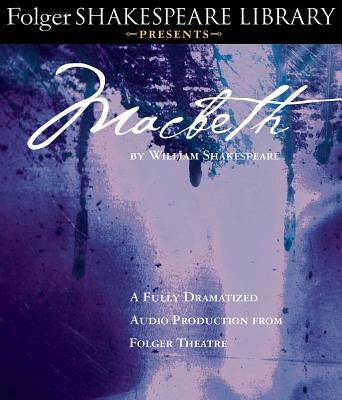 Macbeth, one of Shakespeare’s most popular plays, is among the most powerful and influential tragedies in the English language. Promised a golden future as ruler of Scotland by three sinister witches, Macbeth murders the king in order to succeed to the throne. Tortured by his conscience and fearful of discovery, he becomes fatally enmeshed in a web of treachery and deceit.

This new full-cast recording—based on the most respected edition of Shakespeare’s classic—expertly produced by the Folger Theatre, is perfect for students, teachers, and the everyday listener.

The Folger Shakespeare Library is a world-renowned research center on Shakespeare and on the early modern age in the West. Its conservation lab is a leading innovator in the preservation of rare materials. Its well-known public programs include plays, concerts, literary readings, family activities, and exhibitions, as well as numerous programs for students and teachers. The Folger also publishes the illustrated, completely re-edited Folger Editions of Shakespeare's plays, award-winning exhibition catalogs, and the journal Shakespeare Quarterly. The Folger opened in 1932 as a gift to the American nation from Henry Clay Folger and his wife Emily Jordan Folger. It is administered by a Board of Governors under the auspices of Amherst College, Henry Folger’s alma mater.

William Shakespeare was born in April 1564 in the town of Stratford-upon-Avon, on England’s Avon River. When he was eighteen, he married Anne Hathaway. The couple had three children—an older daughter Susanna and twins, Judith and Hamnet. Hamnet, Shakespeare’s only son, died in childhood. The bulk of Shakespeare’s working life was spent in the theater world of London, where he established himself professionally by the early 1590s. He enjoyed success not only as a playwright and poet, but also as an actor and shareholder in an acting company. Although some think that sometime between 1610 and 1613 Shakespeare retired from the theater and returned home to Stratford, where he died in 1616, others believe that he may have continued to work in London until close to his death.
Loading...
or support indie stores by buying on