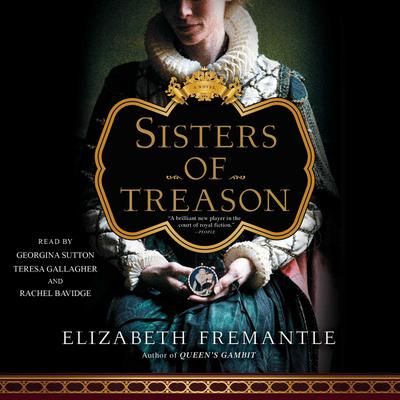 From the author People called “a must-read for Philippa Gregory fans,” a “terrifically entertaining” (The Sunday Times, London) novel about two sisters who must survive life in the Tudor court after the execution of their sister Lady Jane Grey who was queen for just nine days.

Early in Mary Tudor’s turbulent reign, Lady Catherine and Lady Mary Grey are reeling after the brutal death of their elder seventeen-year-old sister, and the succession is by no means stable. In Sisters of Treason, Elizabeth Fremantle brings these young women and their perilous times to vivid life.

Neither sister is well suited to a dangerous career at court. Flirtatious Lady Catherine, thought to be the true heir, cannot control her compulsion to love and be loved. Her sister, clever Lady Mary, has a crooked spine and a tiny stature in an age when physical perfection equates to goodness—and both girls have inherited the Tudor blood that is more curse than blessing. For either girl to marry without royal permission would be a potentially fatal political act. It is the royal portrait painter, Levina Teerlinc, who helps the girls survive these troubled times. She becomes their mentor and confidante, but when the Queen’s sister, the hot-headed Elizabeth Tudor, inherits the crown, life at court becomes increasingly treacherous for the surviving Grey sisters. Ultimately each young woman must decide how far she will go to defy her Queen, risk her life, and find the safety and love she longs for.

“An enthralling story of love and tyranny, Sisters of Treason brings the Tudor Courts to life again, in all their romance and horror” (Leanda de Lisle).
Loading...