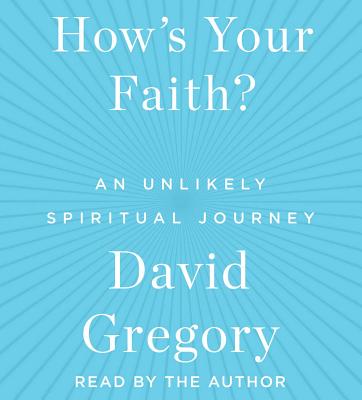 Join former NBC newsman and Meet the Press moderator David Gregory as he probes various religious traditions to better understand his own faith and answer life’s most important questions: who do we want to be and what do we believe?

While David was covering the White House, he had the unusual experience of being asked by President George W. Bush “How’s your faith?”

David’s answer was just emerging. Raised by a Catholic mother and a Jewish dad, he had a strong sense of Jewish cultural and ethnic identity, but no real belief—until his marriage to a Protestant woman of strong faith inspired him to explore his spirituality for himself and his growing family.

David’s journey has taken him inside Christian mega-churches and into the heart of Orthodox Judaism. He’s gone deep into Bible study and asked tough questions of America’s most thoughtful religious leaders, including evangelical preacher Joel Osteen and Cardinal Timothy Dolan, the Catholic Archbishop of New York. It has brought him back to his childhood, where belief in God might have helped him through his mother’s struggle with alcoholism, and through a difficult period of public scrutiny and his departure from NBC News, which saw his faith tested like never before.

David approaches his faith with the curiosity and dedication you would expect from a journalist accustomed to holding politicians and Presidents accountable. But he also comes as a seeker, one just discovering why spiritual journeys are always worthwhile.

David Gregory is the former moderator of NBC’s Meet the Press. He previously served as Chief White House Correspondent for NBC News, where he was hailed by Washingtonian magazine as a “firebrand in the front row.” How’s Your Faith? is his first book.

David Gregory is the former moderator of NBC’s Meet the Press. He previously served as Chief White House Correspondent for NBC News, where he was hailed by Washingtonian magazine as a “firebrand in the front row.” How’s Your Faith? is his first book.

Praise For How's Your Faith: An Unlikely Spiritual Journey…

"David Gregory has taken on the most fundamental of questions in this thoughtful and engaging book about the deepening of one's faith in an invisible order amid the hurly-burly of the visible world. The result is an honest and bracing account of a good man's struggle to be an even better man--with God's help. I learned a lot from How's Your Faith? and you will, too."

“His experience in journalism made Gregory approach faith in an investigative manner, and his quest to answer questions that define his existence led him to meet with Christian faith leaders such as Lakewood Church Pastor Joel Osteen and President of the Southern Baptist Convention's Ethics & Religious Commission, Russell Moore.”

"In eloquent but everyday language, David Gregory introduces us to his ever deepening faith. A spiritual journey that is honest, humble, and elevating."

"A thoughtful, introspective, and moving account. This is a book for seekers of faith."

“Gregory’s vulnerability in sharing the lessons he learned... distinguishes this book in the crowded lineup of spiritual-seeking memoirs."
or
Not Currently Available for Direct Purchase
Copyright © 2020 American Booksellers Association