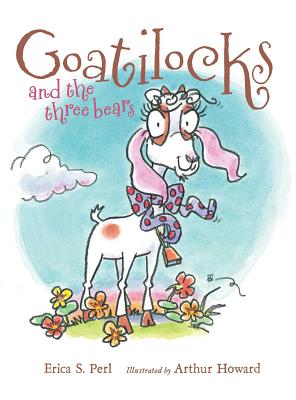 Goatilocks and the Three Bears

Goatilocks gobbles more than porridge in this fractured fairy tale that puts a hilarious twist on a favorite story.

Once upon a time, there was a kid named Goatilocks.
She lived down the road from a family of bears...

This playful adaptation of a favorite fairy tale is full of tummy-rumbling fun.

Praise For Goatilocks and the Three Bears…

"Events in Perl's humorous and fresh retelling of the traditional tale unfold at a quick pace. Howard's cheery and detailed watercolors infuse extra doses of charm into the story. . . . Howard adds humorous tidbits that will even evoke chuckles from adults. . . . Perl and Howard's work provides an entertaining alternative to more traditional versions of the story. Teachers can successfully use it in compare-and-contrast lessons with other versions of the tale. Families, too, should find this picture book to be a bedtime read-aloud treat."
— School Library Journal, June 2014

"[T]his fractured nursery tale...makes good use of page turns for dramatic and comic effect. Brightened with watercolor washes, Howard's cartoonlike line drawings add expressive characterizations and witty visual touches. The precisely worded text retains the satisfying structure of the original tale while adding some amusing twists and a couple of enjoyable puns. Fun for reading aloud to groups of children, this Goldilocks spoof offers a good narrative, plenty of laughs, and a happy ending."
— Booklist, June 2014

Erica S. Perl is a full-time writer and part-time chicken. She is the author of Chicken Butt!; Ninety-three in My Family (Reuben Award, Book Sense Pick, Slate’s Best Books), which School Library Journal called a “comic masterpiece;” and Chicken Bedtime Is Really Early, which received a starred review from Booklist. She lives with her family in Washington, DC.

Arthur Howard is the illustrator of Goatilocks and the Three Bears by Erica S. Perl; Noodle & Lou by Liz Garton Scanlon; the Mr. Putter & Tabby series, Gooseberry Park books, and Motor Mouse series by Cynthia Rylant; and his own picture books. He has also coauthored and illustrated many books of humor for adults and appeared for seven seasons in the PBS math-oriented production Square One Television. He lives in New York City.