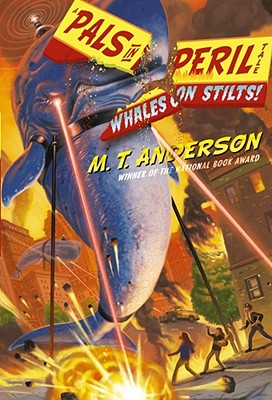 Whales on Stilts! (A Pals in Peril Tale)

In the first installment of National Book Award winner M.T. Anderson’s Pals in Peril series, a madman has unleashed an army of stilt-walking, laser-beaming, thoroughly angry whales upon the world! Luckily, Jasper Dash and his friends Katie Mulligan and Lily Gefelty are around to save the day.

Sure, Lily Gefelty is just an average twelve-year-old girl. But her dad—a normal-enough-seeming guy—just so happens to work for an evil genius who plans to unleash an army of extremely cranky, stilt-walking, laser-beam-eyed whales upon the world.

Lucky for Lily, her two best friends are anything but average. Both of them are famous for their adventures. Jasper Dash, Boy Technonaut, invents gadgets; Katie Mulligan spends her spare time fighting off zombies and were-goats. Surely they’ll know what to do. And if they don’t? Then it will be up to Lily—average, everyday Lily—to come up with a plan.

Praise For Whales on Stilts! (A Pals in Peril Tale)…

*"Armed with an array of adjectives, non-sequitors, bizarre asides, irrelevant footnotes, and running gags, Anderson sends up decades of children’s book series, and creates a hysterical tale of his own."
—Publishers Weekly, starred review

*"Goosebumps fans and readers who get Lemony Snicket’s brand of humor will be rolling in the aisles."
—Booklist, starred review

Kurt Cyrus has illustrated numerous acclaimed picture books celebrating the natural world, including What in the World?: Numbers in Nature by Nancy Raines Day; Mammoths on the Move by Lisa Wheeler; and his own Tadpole Rex and The Voyage of Turtle Rex. His art also appears in the middle grade series Pals in Peril by M.T. Anderson. Kurt lives with his wife in McMinnville, Oregon. Visit him at KurtCyrus.com.
Loading...
or support indie stores by buying on
(This book is on backorder)