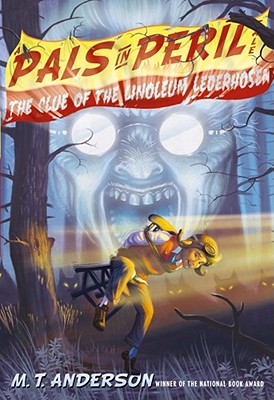 The Clue of the Linoleum Lederhosen (A Pals in Peril Tale)

In the zany and humorous second book of National Book Award winner M.T. Anderson’s Pals in Peril series, Jasper Dash and his friends are on the case, solving a spine-tingling mystery.

In need of a vacation after their last laser-beam-filled adventure, Lily, Jasper, and Katie have flown off for a restful stay at a distant mountain lodge, which just so happens to be hosting a gathering for characters from other middle grade series novels. Two—the marvelous Manley Boys—look suspiciously like a pair of crime-solving bothers named Frank and Joe Hardy. Two others are a pair of boy-crazy twin sisters who attend a high school in some sweet valley somewhere. And then there are the Hooper Quints, who, along with a wealthy heiress’s priceless diamond necklace, have suddenly gone missing.

Does it surprise you that the supposedly “on vacation” Katie, Jasper, and Lily are the only ones around who have the chops to solve this challenging mystery?

National Book Award winner M. T. Anderson has done it again with this second volume of his riotous and wonderfully weird series.

*"Great Scott! The author of Whales on Stilts has dashed off a swell sequel…Never has the Hardy Boys-Nancy Drew axis been knocked further or more delightfully askew."
—Booklist, starred review

Kurt Cyrus has illustrated numerous acclaimed picture books celebrating the natural world, including What in the World?: Numbers in Nature by Nancy Raines Day; Mammoths on the Move by Lisa Wheeler; and his own Tadpole Rex and The Voyage of Turtle Rex. His art also appears in the middle grade series Pals in Peril by M.T. Anderson. Kurt lives with his wife in McMinnville, Oregon. Visit him at KurtCyrus.com.
Loading...
or
Not Currently Available for Direct Purchase