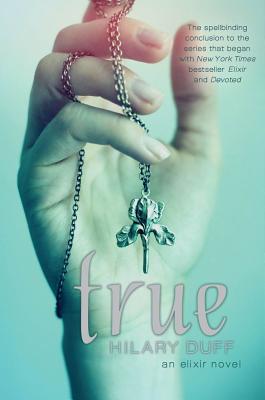 The epic love story of Clea and Sage comes to its thrilling conclusion in the final book in the Elixir series by multitalented star Hilary Duff.

Following the harrowing events of Elixir and Devoted—and the ceremony that almost killed Sage—Clea faces a new reality: With Sage’s soul in Nico’s body, the love of her life looks an awful lot like her best friend’s boyfriend. Can Clea and Sage really be happy under these circumstances?

Clea wants to try to enjoy their new life together, but Sage is acting different—angry—and she struggles to keep her friends from finding out what has happened to him. Something is clearly haunting Sage, and Clea is losing control. Can she trust her friends with the dangerous truth, or will she have to risk losing Sage to madness?

Hilary Duff is a multifaceted actress and recording artist whose career began on the popular Disney sitcom Lizzie McGuire. She has since appeared in many films and TV series, including a guest appearance on Gossip Girl. She has sold more than 13 million albums worldwide and has a clothing line, Femme for DKNY, and a bestselling fragrance, With Love…Hilary Duff, for Elizabeth Arden. Hilary’s humanitarian work is recognized throughout the world, and she is actively involved with many different charities benefitting children and animals. She has served on The President’s Council on Service and Civic Participation and was named ambassador to the youth of Bogatá, Colombia. She is the New York Times bestselling author of the novels Elixir, Devoted, and True.
Loading...
or support indie stores by buying on