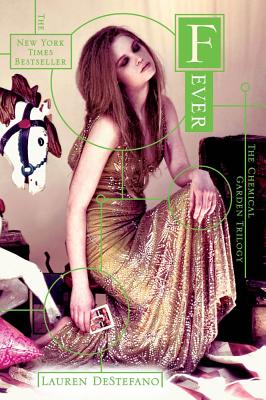 “Picking up where Book I, Wither, left off, Fever is a non-stop thrill ride. Rhine, devastated by the life she has been forced into, makes a life-altering decision affecting not just her, but her sister wives and Gabriel as well. Rhine's journey to freedom and her struggle with who ultimately decides one's fate makes readers question their own mortality. DeStefano has written one of the strongest female characters in young adult fiction today.”
— Alexis Duell, Market Block Books, Troy, NY
View the List

The second book in The Chemical Garden Trilogy reveals a world as captivating—and as dangerous—as the one Rhine left behind in Wither.

Rhine and Gabriel have escaped the mansion, but they’re still in danger. Outside, they find a world even more disquieting than the one they left behind.
Determined to get to Manhattan and find Rhine’s twin brother, Rowan, the two press forward, amid threats of being captured again…or worse.
The road they are on is long and perilous—and in a world where young women only live to age twenty and men die at age twenty-five, time is precious. In this sequel to Lauren DeStefano’s harrowing Wither, Rhine must decide if freedom is worth the price—now that she has more to lose than ever.

"Rhine's struggles and pain are real, and her story is both heartbreaking and hopeful. I couldn't read this book fast enough."

--Beth Revis, NY Times Bestselling Author of Across the Universe