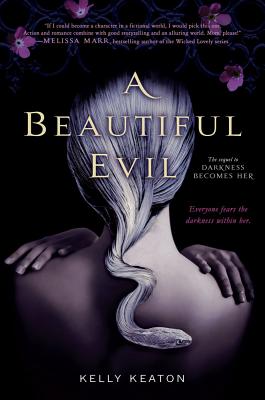 Myth and mayhem inhabit a richly reimagined New Orleans in this sequel to Darkness Becomes Her.

After the epic graveyard battle at the end of Darkness Becomes Her, Ari and her friends know what they’re up against: Ari is facing the Medusa curse and is haunted by the image of what she will become. To make matters worse, the heinous goddess Athena has kidnapped young Violet and is threatening to destroy Ari.

Ari, along with the superhot Sebastian, is doing everything she can to learn more about Athena and to get Violet back. But the battle of good and evil is bigger than she realizes, and she’s about to be pulled into a world more horrific than she could ever imagine....

Kelly Keaton is the critically acclaimed author of The Darkness Becomes Her trilogy. As Kelly Gay, she writes the popular Charlie Madigan series for Pocket Books. While she calls Raleigh, North Carolina, home, she can also be found chatting about books and life on Facebook and Twitter. Read more about Kelly on her website at KellyKeaton.net.

Praise For A Beautiful Evil…

“If I could become a character in a fictional world, I would pick this one. Action and romance combine with good storytelling and an alluring world. More, please!”

“Filled with action and suspense. Readers will continue to root for Ari’s triumph over Athena, hoping that she breaks the curse that plagues her future.” --VOYA, December 2011