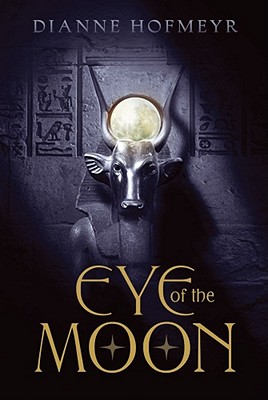 Eye of the Moon

Isikara and her father tend the sacred crocodiles and assist at mummifications of both humans and animals. One day, they are ordered to a tomb. Two bodies are waiting for them--Queen Tiy and her eldest son, Tuthmosis. Tuthmosis has been poisoned but is clinging to life. With no time to spare, Isikara rescues the young prince and runs away with him. The pair find themselves on a journey across Egypt, searching for allies who will help Tuthmosis regain his throne. Their travels lead them along the Nile, across the desert, and through bustling market towns. All the while they must avoid their pursuers, the High Priests who wish to silence them. But there are dangers in the desert and all around. Who can they trust? And where will their adventure lead them?

In this gripping tale, published for the first time in the U.S., author Dianne Hofmeyr spins a web of intrigue, mystery and adventure, woven throughout with fascinating historical details about Ancient Egypt.

Praise For Eye of the Moon…

"The landscape that flows by them as they make their way along the and through the desert is described in rich sensory terms... Weapons, household items, pottery, and clothing known only to readers from tomb paintings or as faded museum objects are here given weight, color, and utility...the action comes together in the novel’s third act, when Isikara and Tuthmosis join forces with a runaway Nubian slave and ally themselves with ’s rivals, the Kushites.–Paula Willey, Public Library,

"Writing like this allows the reader to seamlessly become a part of that world without having to understand every bit of it...The story is fast paced, but I was still allowed to get a sense of the characters. Overall a great read, and I look forward to an upcoming second book."
--Kiss the Book, Stephanie MLS graduate

"Packed with information about daily life in ancient Egypt, this tale full of murder, intrigue, and adventure will be sure to appeal."

Dianne Hofmeyr grew up next to the sea on the southern tip of Africa. Her travels with notebook and camera to Egypt, Tunisia, and Senegal, through China, Vietnam, and across Siberia have led to stories that have won South Africa's M-Net Book Prize and the Sanlam Gold for Youth Literature, as well as the Young Africa Award and an IBBY. She is also the author of Fish Notes and Star Song and several picture books based on Ancient Egyptian myths.
Loading...
or
Not Currently Available for Direct Purchase