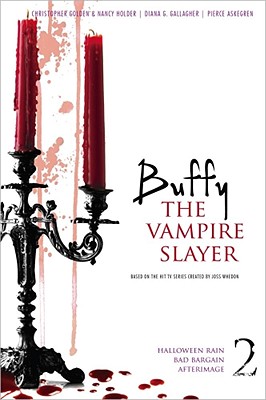 In every generation, there is a Chosen One. A slayer destined to protect the human race. She alone must fight the demons of hell. She alone must risk her life to stop the spread of evil.

Buffy is the Chosen One.

In Halloween Rain, as if Halloween at the Hellmouth isn’t bad enough, a brewing storm threatens to bring new demons to life, just in time for a celebratory massacre.

A curse on the school’s rummage sale causes strange behavior in the halls of Sunnydale High in Bad Bargain.

Buffy and her friends are looking forward to the revival of the old drive-in theater, but when people start slipping into comas in Afterimage, this late show may be their last….

Nancy Holder has published more than 200 short stories and seventy-eight books, including the New York Times bestselling Wicked series. She lives in San Diego with her daughter, Belle, and far too many animals. Visit her at Nancy Holder.com.
or
Not Currently Available for Direct Purchase
Copyright © 2020 American Booksellers Association