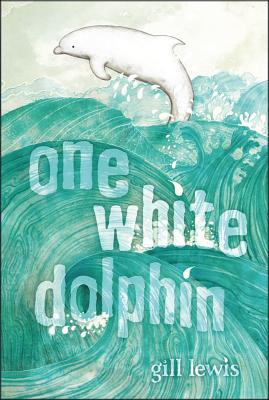 A mother dolphin and her albino calf are in peril in this heart-pounding adventure from the author of the acclaimed ecological novel Wild Wings.

Kara is not sorry she punched Jake in the nose—she simply couldn’t stand to hear him say one more nasty thing about her missing mother, or her out-of-work father…or her. But it’s more than a broken nose to Jake’s family: It’s fuel for the fire. They’ve had it with Kara’s family and their devotion to protecting marine life and saving the reef. Dredging the reef will mean fisherman can reel in more money. That’s what the town needs.

But what the town gets is an unexpected new kid, a Paralympics sailing hopeful named Felix. When a baby albino dolphin caught in old fishing netting washes ashore, Felix and Kara work with vets and specialists to save her and reunite her with her mother, setting off a chain of events that might just save the reef.

Written by a veterinarian and brimming with bravery and beauty, this “poignant and satisfying story about acting for the greater good” (Publishers Weekly) taps into the radiance of nature and dives into the important, timely issue of environmental protection and ecology.

Praise For One White Dolphin…

"A satisfying stranded-dolphin rehabilitation and an edge-of-your-seat sailboat rescue.... [Lewis] evokes the natural world beautifully, with compelling descriptions of the surprising undersea and shoreline wonders that support the strong environmental message."--Kirkus Reviews

* "This life-affirming novel gets its depth from well-drawn, supportive characters such as Kara's father, her cousin Daisy, and Felix, a new boy who has cerebral palsy. But the satisfying climax and believable ending come about because of Kara's indomitable and generous spirit."--Shelf Awareness, starred review

Gill Lewis is the author of the critically acclaimed Wild Wings and One White Dolphin, both winners of the Green Earth Book Award, as well as Moon Bear, Gorilla Dawn, and Scarlet Ibis. A veterinarian, her love of animals and the natural world plays a big part in her writing. She lives in the UK.

Raquel Aparicio was born in Avila, Spain, with her twin sister Sae. After spending a few years in Edinburgh, Scotland, she moved to Spain to study illustration and then to Florida where she attended the Illustration Academy. Her work has appeared in The New York Times, Elle, and others. She has taught collage illustration workshops at the Circulo de Bellas Artes in Madrid, and her work has been honored by the Society of Illustrators.
or support indie stores by buying on