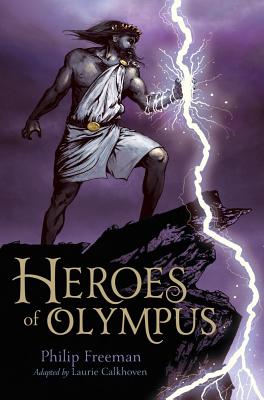 Accessible, fast-paced retellings of the most important classical Greek and Roman myths, adapted for middle graders.

Ancient myths continue to have modern relevance—for thousands of years they have been the basis for plays, operas, paintings, and movies. And in these retellings from acclaimed writer and scholar Philip Freeman, classic tales from Greek and Roman mythology find new life and inspire aspiring writers, artists, and musicians. Adapted from the lengthier Oh My Gods and specially tailored to a younger audience, these irresistible stories of philandering gods, flawed heroes, and tragic lovers portray the fundamental aspects of humanity and are filled with entertaining drama and valuable insights. Sixty dramatic illustrations enliven the book.

Philip Freeman is Qualley Professor of Classics at Luther College in Decorah, Iowa, and a former professor of classics at Washington University in St. Louis. He was selected as a visiting fellow at the Institute for Advanced Study at Princeton for January 2012. He earned the first joint PhD in classics and Celtic studies from Harvard University, and has been a visiting scholar at the Harvard Divinity School, the American Academy in Rome, and the Center for Hellenic Studies in Washington, DC. The author of several previous books including Alexander the Great, St. Patrick of Ireland, and Julius Caesar, he lives with his family in Decorah, Iowa. Visit him at PhilipFreemanBooks.com.

Drew Willis is an art director and illustrator working in New York City. Visit him at DrewWillis.com.
Loading...
or
Not Currently Available for Direct Purchase