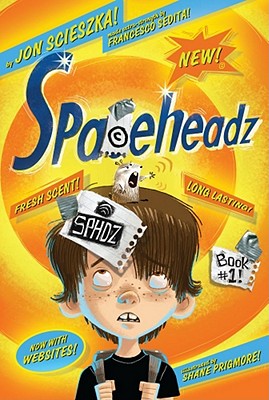 The perfect combination of the age old experience of holding and pouring over a physical book with newest media technology that kids love!

Michael K. just started fifth grade at a new school. As if that wasn't hard enough, the kids he seems to have made friends with apparently aren't kids at all. They are aliens. Real aliens who have invaded our planet in the form of school children and a hamster. They have a mission to complete: to convince 3,140,001 kids to BE SPHDZ.

But with a hamster as their leader, "kids" who talk like walking advertisements, and Michael K as their first convert, will the SPHDZ be able to keep their cover and pull off their assignment?

Shane Prigmore is an accomplished professional in the animation, film, and illustration fields. Shane won an Annie Award for his design work on the stop motion feature Coraline. He has also contributed his numerous talents to such projects as: How to Train Your Dragon, The Croods, Rise of the Guardians, Foster’s Home for Imaginary Friends, The Lord of the Rings: The Two Towers, and The Iron Giant...to name a few. Shane resides in Los Angeles.
Loading...
or
Not Currently Available for Direct Purchase