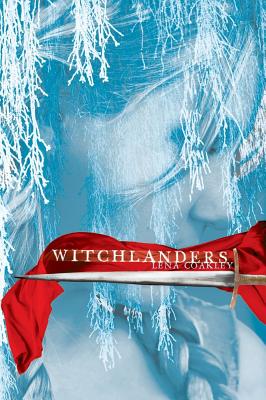 High in their mountain covens, red witches pray to the Goddess, protecting the Witchlands by throwing the bones and foretelling the future.

But it’s all fake.

At least, that’s what Ryder thinks. He doubts the witches really deserve their tithes—one quarter of all the crops his village can produce. And even if they can predict the future, what danger is there to foretell, now that his people’s old enemy, the Baen, has been defeated? But when a terrifying new magic threatens both his village and the coven, Ryder must confront the beautiful and silent witch who holds all the secrets. Everything he’s ever believed about witches, the Baen, magic, and about himself will change when he discovers that the prophecies he’s always scorned…are about him.

Laced with rich, imagined histories; miles of catacombs; and prophecies true and false, Witchlanders takes place in an evocative, tantalizingly vibrant world and raises equally evocative questions: Who gets to defines history? When does a legend become a crutch? And why does the enemy in war look a lot like the hero? Lena Coakley’s first novel is a lush, chilling story that is sure to send shivers through your finger bones.

Lena Coakley was born in Milford, Connecticut, and grew up on Long Island. In high school, creative writing was the only course she ever failed (nothing was ever good enough to hand in!), but, undeterred, she went on to study writing at Sarah Lawrence College. She lives in Toronto, Canada.

* "Takes on faith, doubt, and dualities, exposing their flaws and strengths alike. Plot twists unfold at a riveting pace, the boys' characters are compellingly sketched, and Coakley explores her subject matter masterfully without falling prey to safe plot choices."

* "The rich language will enthrall female and male readers alike.”

* "Coakley’s world comes to life with exquisite detail and imagery; readers will feel the chill of the frost and smell the crackling bonfires. High fantasy lovers will gobble up Witchlanders."


--Bulletin of the Center for Children's Books