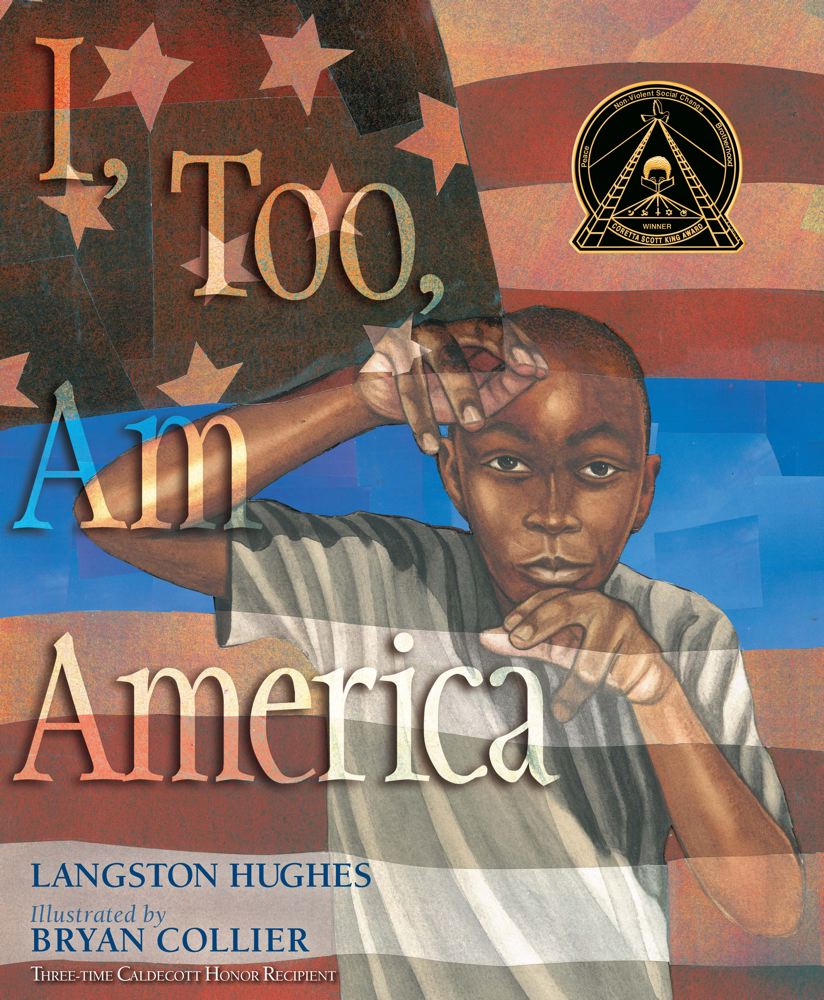 I, Too, Am America

Winner of the Coretta Scott King illustrator award, I, Too, Am America blends the poetic wisdom of Langston Hughes with visionary illustrations from Bryan Collier in this inspirational picture book that carries the promise of equality.


I, too, sing America.
I am the darker brother.
They send me to eat in the kitchen
When company comes,
But I laugh,
And eat well,
And grow strong.

Langston Hughes was a courageous voice of his time, and his authentic call for equality still rings true today. Beautiful paintings from Barack Obama illustrator Bryan Collier accompany and reinvent the celebrated lines of the poem "I, Too," creating a breathtaking reminder to all Americans that we are united despite our differences.

This picture book of Langston Hughes’s celebrated poem, "I, Too, Am America," is also a Common Core Text Exemplar for Poetry.

Praise For I, Too, Am America…

I, Too, Am America
Langston Hughes, illus. by Bryan Collier. Simon & Schuster, $16.99 (40p) ISBN 978-1-4424-2008-3
Caldecott Honor artist Collier (Dave the Potter) uses Hughes’s well-known poem as text for a visual history of Pullman railway porters, one of the first jobs that offered African-American men steady pay, dignity, and a ladder into the middle class. Hughes’s lines—“They send me to eat in the kitchen/ When company comes,/ But I laugh,/ And eat well,/ And grow strong”—fit beautifully with the story of the porters, giving the poem new meaning and impact. Collier’s portraits of the porters at work alternate with bold, sweeping spreads of cotton fields, onto which a porter scatters discarded books and magazines, planting knowledge along the railway lines. The story travels from South to North and from old to new, ending in Harlem, where a contemporary African-American mother rides in a subway car, her son gazing out the window. In the next spread, he’s seen in startling closeup, parting and peering between the stripes of an all-but-invisible American flag. “I, too, am America,” he says. It’s a powerful metaphor for looking at African-American history—and the issue of race in America—from the inside out. Ages 4–8.

A celebration of Pullman porters is the focus of this new picture-book edition of Langston Hughes’ classic poem. The collage spreads, blending oil paintings and cut paper, begin with an image of a speeding train before moving on to large portraits of African American porters serving white passengers aboard a luxury train. When the passengers leave, the porters gather left-behind items—newspapers, blues and jazz albums—and toss them from the train. Carried by the wind, the words and music fall into the hands of African Americans across the country. The final, contemporary pages show young black people celebrating their place in America and dreaming of a bright future. Collier’s long final note explains his interpretation of the poem, and with adult help, kids can look closely at what the pictures show about the porters then and now as well as Collier’s visual themes, including the recurring use of stars and stripes, which culminate in a beautiful, final close-up of a boy with his mother staring through a train window today at the starry city sky.

Langston Hughes (1902–1967) was born in Joplin, Missouri, and lived much of his life in Harlem, New York. As one America’s most cherished chroniclers of the black experience, known for his work during the Harlem Renaissance, Hughes’s work was constantly groundbreaking throughout his forty-six-year career. His poetry about the ocean and the symbolism that surrounds it stems from his travels through Africa and Europe working as a seaman.

Bryan Collier is a beloved illustrator known for his unique style combining watercolor and detailed collage. He is a four-time Caldecott Honor recipient for Trombone Shorty, Dave the Potter, Martin’s Big Words, and Rosa. His books have won many other awards as well, including six Coretta Scott King Illustrator Awards. His recent books include By and By, Thurgood, The Five O’Clock Band, and Between the Lines. He lives in New York with his family.
Loading...
or
Not Currently Available for Direct Purchase