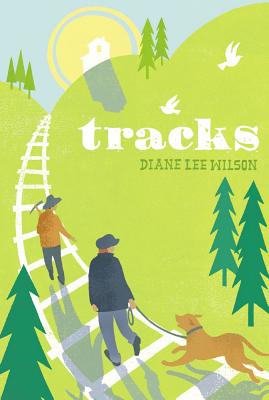 Can the railroad that is uniting America also bridge the gap between two boys from different backgrounds?

Shortly after the Civil War, Malachy laces on his father’s boots and travels to the American West to work on the transcontinental railroad that will unite the country. In addition to the challenge of the physically grueling work, Malachy also has to adjust to working with Chinese men and boys, whom he views with suspicion and contempt. Despite everything, Malachy gets by with his love for his fierce new dog, Brina, and Blind Thomas, the most hardworking and loyal railroad horse around.

But after a Chinese boy is blamed for stealing a bag of coins, Malachy begins to reconsider his prejudices—because Malachy is the real thief, and his conscience is uneasy. He begins to notice the many ways in which the Chinese workers are mistreated. And when real danger threatens, Malachy needs to find the courage to step up and do what’s right.

Diane Lee Wilson’s atmospheric writing vividly depicts the western landscape of America in the 1860s and draws you right in alongside Malachy—and his beloved horse and dog—as he navigates a bumpy moral terrain and discovers a friendship he never knew was possible.

"Diane Lee Wilson's TRACKS is powerful storytelling . . . TRACKS will serve double-duty as an exciting piece of historical fiction worthy of supplementing both the California history and United State history curricula. We meet a number of true-life historical characters. And that horse Blind Thomas (who might have been real -- see the author’s notes) is an absolute heartbreaker. But, most of all, we learn about an important underside of our history that cannot be done justice by some sterile textbook passage and that very much relates to how certain groups are perceived here in the twenty-first century."--Richie's Picks

"Wilson's (Raven Speak) coming-of-age story plunges readers into the heart of Malachy's character and circumstances (of Irish heritage, Malachy, like the Chinese workers, is no stranger to prejudice). Readers will be drawn in by Wilson's eloquent and expressive writing as it details Malachy's emotional and physical struggles toward adulthood."--Publishers Weekly

"Historical fiction with relevance to issues today, this novel is nonetheless firmly grounded in its own time and place."--School Library Journal

Diane Lee Wilson is the author of Black Storm Comin’ (which won a Spur Award for Best Western Juvenile, was a Booklist Editors’ Choice, a VOYA Top Shelf fiction pick, a Notable Social Studies book, a Bulletin Blue Ribbon book, and a Book Links Lasting Connection), Firehorse (which was a Booklist Top Ten Mystery/Suspense pick and an ALA Amelia Bloomer Project pick), Raven Speak, and Tracks. She lives in Escondido, California. Visit her online at DianeLeeWilson.com.
Loading...
or support indie stores by buying on