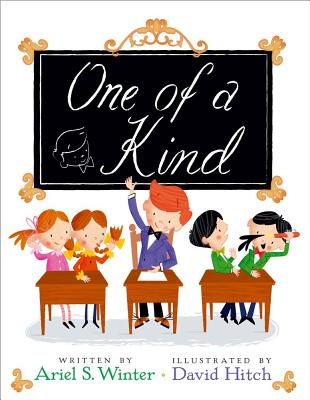 One of a Kind (Hardcover)

In this wry and witty picture book, an only child learns that in a classroom of multiples, individuality can be awesome.

All the kids in Lysander Singleton’s class are either twins or triplets, which means Lysander Singleton is the only “only child” at Twin Oaks Elementary. He tries to do what he can to fit in—making photocopies of himself, or attempting to play games with the other kids—though his efforts are usually met with unfortunate results.
But when it comes time for the schoolwide Twindividuation competition, a series of events meant to encourage individuality, Lysander quickly realizes that being the only “only child” does have its advantages—and that being unique isn’t such a bad thing after all.

Ariel S. Winter was a finalist for the Los Angeles Times Book Prize, the Shamus Award, and the Macavity Award for his novel The Twenty-Year Death. He is also the author of the children’s picture book One of a Kind, illustrated by David Hitch, and the blog We Too Were Children, Mr. Barrie. He lives in Baltimore.
or
Not Currently Available for Direct Purchase
Copyright © 2020 American Booksellers Association