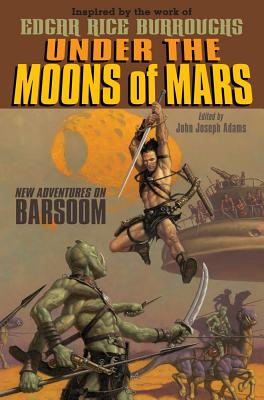 Under the Moons of Mars

Celebrate 100 years of John Carter of Mars with this all-new collection of original stories and art!

Readers of all ages have read and loved Edgar Rice Burroughs’ Barsoom series since the first book, A Princess of Mars, was published in 1912. Now, in time for the 100th anniversary of that seminal work, comes an anthology of original stories featuring John Carter of Mars in brand-new adventures. Collected by veteran anthology editor John Joseph Adams, this anthology features stories from titans of literature such as Peter S. Beagle and Garth Nix and original art from Mark Zug, Charles Vess, and many more—plus an introduction by Tamora Pierce and a glossary of Mars by Richard A. Lupoff.

Praise For Under the Moons of Mars: New Adventures on Barsoom…

"Plenty of sword work and old-style action-adventure, with the occasional clever spin."--Kirkus Reviews

"It's inconceivable that this volume won't send readers back to the original novels."--Booklist

"An excellent collection that sci/fi adventure fans will enjoy, and it may guide a new generation of readers to Barsoom."--School Library Journal