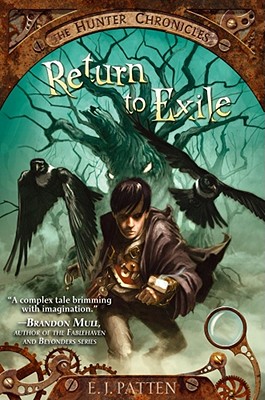 Return to Exile (The Hunter Chronicles #1)

ONE BOY. UNTOLD ENEMIES. A WHOLE WORLD TO SAVE.?IT'S GOING TO BE A LOOONG THREE DAYS.

Eleven years ago, a shattered band of ancient monster hunters captured an unimaginable evil and Phineas T. Pimiscule rescued his nephew, Sky, from the wreckage of that great battle. For eleven years, Sky Weathers has studied traps, puzzles, science, and the secret lore of the Hunters of Legend believing it all a game. For eleven years, Sky and his family have hidden from dark enemies while, unbeknownst to Sky, his uncle Phineas sacrificed everything to protect them.

For eleven years, Sky Weathers has known nothing of that day.

But on the eve of Sky's twelfth birthday and his family's long-awaited return to the town of Exile, everything changes. Phineas has disappeared, and Sky finds himself forced to confront the mysterious secrets he's denied for so long: why did his family leave Exile on that day so long ago? What, exactly, has Phineas been preparing him for? And, the biggest mystery of all, who is Sky really and why does everyone want to kill him?!

Featuring an action-packed plot that covers the gamut of every monster you've never heard of (not to mention weird powers and weapons made out of garbage), Return to Exile is brimming with boy and girl appeal and is a gem for reluctant young readers. And, with a diverse assortment of well-aged monster hunters in the cast, this series will be a hit with adults young and old as well.

Praise For Return to Exile (The Hunter Chronicles #1)…

"Return to Exile marks the beginning of a remarkable new series. I loved the characters, and its originality and intensity kept me ripping through the pages. A stunning book." --James Dashner, New York Times best selling author of The Maze Runner and The Scorch Trials