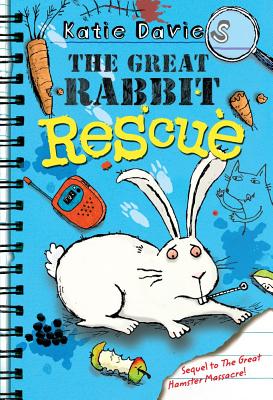 The kids from The Great Hamster Massacre are back—and on a rabbit rescue mission!

Joe has gone to live with his dad, leaving behind his beloved pet rabbit. Anna and Suzanne try to look after it for him, but when the rabbit becomes ill, they're convinced it's because it's missing Joe. Now Joe is sick too. The girls are certain that Joe and the rabbit will die unless they are reunited soon...But can Anna and Tom and Suzanne pull off The Great Rabbit Rescue in time?

Praise For The Great Rabbit Rescue (The Great Critter Capers)…

"This gentler sequel [to The Great Hamster Massacre] again showcases Davies’ laconic style and deadpan humor, so well-matched to the chapter-book format. Neatly complementing the text, Shaw’s sly, witty illustrations, pie charts and graphics are a treat. A welcome return for the indomitable Anna."

"Readers will enjoy Anna's narration, which has an animated, slightly rambling style that really sounds like how a nine-year-old would tell a story. It's also a joy to read about a group of children who spend most of their time playing make-believe games rather than parking themselves in front of a screen. Line drawings pepper the text, giving the book a "Wimpy Kid" feel."

Katie Davies knows a thing or two about animal disasters. She is the author of The Great Dog Disaster, The Great Cat Conspiracy, The Great Rabbit Rescue, and her first book, The Great Hamster Massacre, which was inspired by true events—when she was twelve years old, after a relentless begging campaign, she was given two Russian Dwarf hamsters for Christmas. She has yet to recover from what happened to those hamsters. Katie lives with her family in North London. Visit her at KatieDaviesBooks.com.

Hannah Shaw was born into a large family of sprout-munching vegetarians. She lives in a little cottage in the Cotswolds with her husband, Ben the blacksmith, and her rescue dog, Ren. She finds that her overactive imagination fuels new ideas, but unfortunately it keeps her awake at night!
Loading...
or
Not Currently Available for Direct Purchase