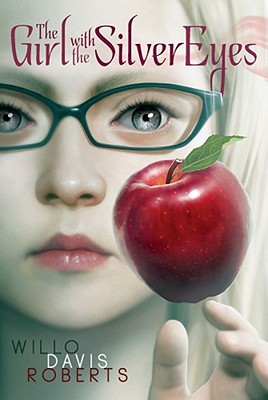 The Girl with the Silver Eyes

“There’s something strange about that kid.” At least that’s what everyone says, but they don’t know the truth. Perfect for fans of Stranger Things, this classic novel continues to enthrall.

Katie Welker is used to being alone. She would rather read a book than deal with other people. Other people don’t have silver eyes. Other people can’t make things happen just by thinking about them!

But these special powers make Katie unusual, and it’s hard to make friends when you’re unusual. Katie knows that she’s different but she’s never done anything to hurt anyone so why is everyone afraid of her? Maybe there are other kids out there who have the same silver eyes…and the same talents…and maybe they’ll be willing to help her.

Willo Davis Roberts wrote many mystery and suspense novels for children during her long and illustrious career, including The Girl with the Silver Eyes, The View from the Cherry Tree, Twisted Summer, Megan’s Island, Baby-Sitting Is a Dangerous Job, Hostage, Scared Stiff, The Kidnappers, and Caught! Three of her children’s books won Edgar Awards, while others received great reviews and other accolades, including the Sunshine State Young Reader’s Award, the California Young Reader’s Medal, and the Georgia Children’s Book Award.
Loading...
or support indie stores by buying on