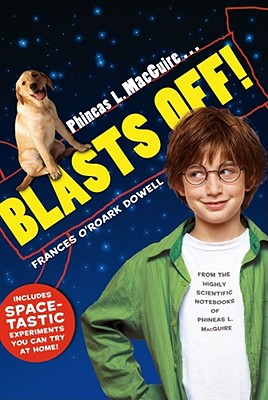 Houston, we have a problem! Phineas L. MacGuire (a.k.a. Mac), is less than up-to-date on planetary happenings. (Marsquakes? Who knew?) If he’s going to be the best scientist in the fourth grade, Mac has to set his sights a little higher. Well, actually a lot higher: Outer Space. But, space camp is expensive and Mac’s mom says he can go only if he earns the money himself. But, where is he going to find enough money for a week on Mars (or a pretty close simulation thereof)? Houston, we have another problem: a gigantic, slobbery dog named Lemon Drop. Mac can earn the money he needs walking Mrs. McClosky’s Yellow Lab, but first he needs to survive the walks! Good thing Mac is a scientific genius with friends like Ben and Aretha. Together the three of them discovers that Lemon Drop is no ordinary dog—that Lab is a real-life Lab-oratory.

"[P]roves that kids can be smart and funny." -- Publishers Weekly

"Mac [is] one of the most charmingly engaging new characters in the modern chapter-book scene." -- Kirkus Reviews

"Full of amusing faux-scientific observations as well as actual scientific facts, this lighthearted...book should appeal to any young reader who can stand a little mold." -- Booklist

"This is a funny, easy read that will entertain both average and reluctant readers. The characters are thoughtful, genuine kids who are creative in their problem solving and truly understand the meaning of friendship." -- School Library Journal