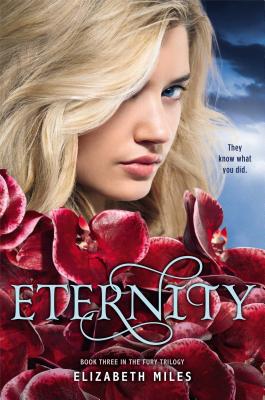 Secrets and revenge make for desperate measures and fateful choices in this gripping conclusion to the Fury trilogy.

The weather is mild in Ascension…but beneath the surface, everything is burning up.

The nightmare Emily Winters has been living through for months shows no sign of ending, as the Furies stay on the peripheral, slowly driving her crazy. Em feels...different. She’s angry, and never cold, and too strong. It’s only a matter of time before she turns into the thing she hates the most. Em needs to take her fate into her own hands, but without Drea’s help, or anyone to turn to, Em is quickly running out of options.

Crow’s involvement with Em has grown more complicated. His visions are taking shape—and it doesn’t look good for Em. But Crow has a plan, and he will do anything to save her. Anything.

JD misses the Em he used to know...and love. She doesn’t seem like herself; it’s like she’s hiding something. When JD begins to learn the truth, he is as scared as he is determined to help her. And Em’s survival may be dependent on his actions.

The Furies love to play games, but this time they’re deadly serious…and they hate to lose.

Elizabeth Miles lives in Portland, Maine, and writes for an alternative newsweekly. Visit her online at ElizabethMilesBooks.com, at Facebook.com/ElizabethMilesWrites, and follow her on Twitter at @MilesBooks.
Loading...
or
Not Currently Available for Direct Purchase