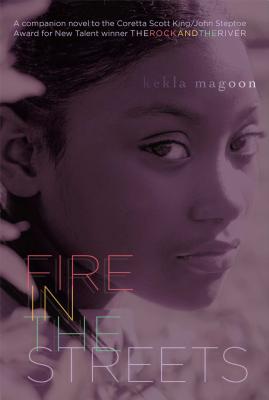 Fire in the Streets (Paperback)

What means more, shared values or shared blood? Maxie’s choice changes everything in this acclaimed companion to The Rock and the River.

Bad things happen in the heat, they say.

Maxie knows all about how fire can erupt at a moment’s notice, especially now, in the sweltering Chicago summer of 1968. She is a Black Panther—or at least she wants to be one. Maxie believes in the movement. She wants to belong. She wants to join the struggle. But everyone keeps telling her she’s too young. At fourteen, she’s allowed to help out in the office, but she certainly can’t help patrol the streets. Then Maxie realizes that there is a traitor in their midst, and if she can figure out who it is, it may be her ticket to becoming a real Panther. But when she learns the truth, the knowledge threatens to destroy her world. Maxie must decide: Is becoming a Panther worth paying the ultimate price?

Kekla Magoon has worked with youth-serving nonprofit organizations in New York City and Chicago. She holds an MFA in writing for children from the Vermont College of Fine Arts and her first novel, The Rock and the River, won the Coretta Scott King–John Steptoe Award for New Talent. She resides in New York City and you can visit her at KeklaMagoon.com.
or support indie stores by buying on
Copyright © 2020 American Booksellers Association