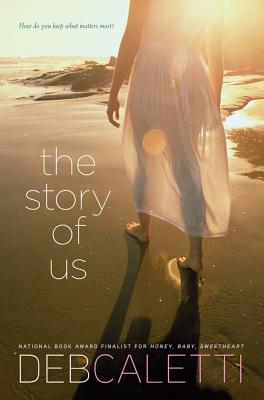 The Story of Us

A week of her mother’s wedding chaos brings a new boy and numerous other complications into Cricket’s life in this funny and romantic novel from Printz Honor medal winner and National Book Award finalist Deb Caletti.

Cricket’s on a self-imposed break from her longtime boyfriend, but she’s picked a bad week to sort out her love life. For one thing, her mother’s romance is taking center stage—after jilting two previous fiancés, her mom is finally marrying Dan Jax, whom Cricket loves. And as wedding attendees arrive for a week of festivities at a guesthouse, Cricket discovers the guesthouse’s hippie owners have a sweet and sexy son—Ash—who Cricket can’t help being drawn to despite her current romantic predicament.

Meanwhile, complications abound: Cricket’s future stepsisters are busy making it clear they’re not happy about the marriage; an old friend decides this is the week to declare his love for Cricket; Grandpa reveals a big secret at a family gathering; and Dan’s ex-wife shows up. Even the dogs—Cricket’s old, ill Jupiter and Dan’s young, lively Cruiser—seem to be declaring war.

While Cricket fears that Dan is in danger of becoming ditched husband-to-be number three, she’s also alarmed by her own desires. Because even though her boyfriend looms large in her mind, Ash is right in front of her…

Praise For The Story of Us…

* "Caletti’s latest Pacific Northwest romance is a stunner, with depth and ambiguity that respects and
challenges the reader.... One of Caletti’s best, this is a title to reread and savor." --Booklist, starred review

"Thoughtful and poetic... quite moving... a rewarding story of a girl's struggle to live and love in a world of constant change." --Publishers Weekly

"Caletti tosses readers into a story that is fast paced from the get-go. Cricket is very appealing. Her concerns about life’s changes feel real; her relationships with her mom and brother are loving and honest... A thoughtful and enjoyable book..." --School Library Journal

"There is a crowd of characters with a nice variety of simple to complex backstories, all of whom... to have a valid part to play." --VOYA

"Smart, likable Cricket is supported by a surfeit of colorful characters and plenty of action.... Caletti [has] exceptional insight into and compassion for her characters..." --Kirkus Reviews

"Caletti's talent for creating interesting, complex characters and relationships that remind readers of their own families shines through in this novel.... a beautiful, emotion-driven story. This is yet another excellent, family-oriented novel."  --thecompulsivereader.com

"One thing I could not stress enough is how real this book felt through the way characters acted and interacted with each other. This could be any family. The specific memories made it theirs, but the human interaction that came out through the novel could belong to anyone.... I thoroughly enjoyed this novel, and would recommend it for anyone who enjoys thinking about how we communicate and interact with others, and what it means to grow up." --darkfaerietales.com

"The story is driven by meticulously delineated and authentically imperfect characters—even Jupiter, Cricket’s elderly beagle, has a personality all her own—and sharp, clever Gilmore Girls-esque dialogue. Cricket’s first-person narration is mature and...self-aware; her observations about the nature of family, friendship, and the canine/human connection ring true." --The Horn Book

“Caletti’s writing possesses both vigor and perceptivity, with characters brought to vivid life in a quick turn of phrase. Readers uncertain about their own upcoming big moves into adulthood may relate to Cricket’s anxiety and applaud her negotiation of a difficult transition." --Bulletin of the Center for Children's Books