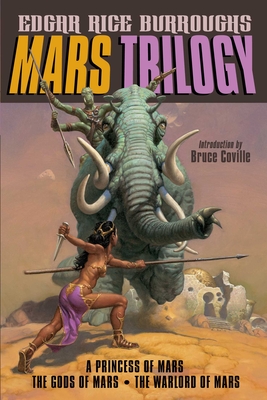 This bind-up of the first three John Carter of Mars books is an ideal 100th anniversary keepsake.

Ever since A Princess of Mars was published in 1912, readers of all ages have read and loved Edgar Rice Burroughs’ Barsoom series. Now, 100 years later, this brand-new bind-up contains the first three classic John Carter of Mars books: A Princess of Mars, The Gods of Mars, and The Warlord of Mars. Featuring an Introduction by Bruce Coville and illustrations from three classic fantasy illustrators—Mark Zug, Scott Gustafson, and Scott Fischer—this collection is an incredible value and will be treasured by existing and new fans.

Don’t miss the new John Carer anthology, Under the Moons of Mars!

Edgar Rice Burroughs (1875–1950) is best known for his creation of Tarzan of the jungle and of the heroic John Carter who adventured on Mars, although he is also the author of many other novels in a range of genres.

Scott M. Fischer is a painter by birth, a musician by training, and a storyteller by choice. Best known as the author/illustrator of JUMP!, he is also the illustrator of Twinkle, the New York Times bestselling Peter Pan in Scarlet, Lottie Paris Lives Here, and Lottie Paris and the Best Place. Scott lives with his wife, daughter, and a menagerie of animals in Belchertown, Massachusetts.

Scott Gustafson is an illustrator whose most recent book is Favorite Nursery Rhymes from Mother Goose. He has also illustrated Classic Fairy Tales, Alphabet Soup and Peter Pan. Eddie is his first novel. He lives in Chicago.
Loading...
or support indie stores by buying on